PARIS — Bambuser, a start-up that specializes in livestream shopping, has won the annual innovation award of LVMH Moët Hennessy Louis Vuitton for 2021, signaling the channel is on the rise.

The luxury group took to the stage at Vivatech for its fifth annual awards ceremony — resuming the tradition after last year’s event was shifted online due to pandemic lockdowns.

Among changes to the show format was the master of ceremonies, with an actress picking up the role, accompanied by live cello music from the stage. She kicked off with a brief monologue evoking the personal trials and tribulations of start-up life — and the moment things take a new turn when “One day, LVMH steps in.”

LVMH stepped in, in more ways than one, reconfiguring its jury process by adding a layer of internal executives to form a selection committee to head the various prize categories. Officials at the group said the change was meant to ensure that winning start-ups are aligned with LVMH’s priorities, and that jury members would then act as internal mentors for the finalists.

Earlier stages of the selection process entail a vote from some 300 employees, venture capitalists and members of the press, who list their top 10 picks — this is how the pool of 850 applicants was whittled down to 28. 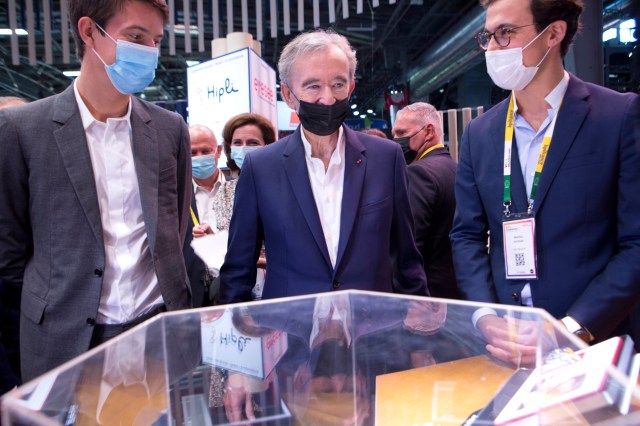 Executives presiding over each category, including the group’s environmental director Hélène Valade and chief omnichannel director Michael David, fanned across the stage, stepping forward to announce the finalists — winners of each category.

These included Data&Data, a start-up that analyzes volumes of transactions to help luxury companies sharpen marketing; Each One, which links refugees and migrants carrying work papers to multinational companies; game publisher Aglet that has sneaker fans competing for limited-edition virtual sneakers from top labels, reusable packaging specialist Hipli and Galy, which grows cotton from cells in bioreactors. 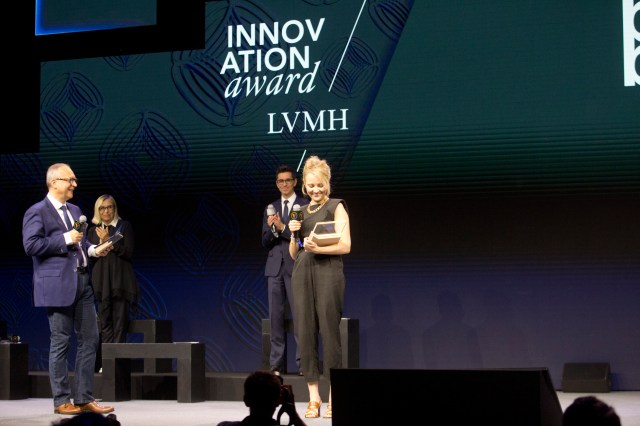 “Before the pandemic, we always said the more time we spend online the more premium in-person experiences become, it’s definitely the case, I think we’re all ready to get back to being together,” remarked Ian Rogers, the group’s former chief digital officer who presided over the ceremony in the past, but has since moved on to a startup himself — in the realm of crypto currencies.

In a brief, pre-recorded speech projected on a screen, Arnault apologized for not being there in person, and pledged to come next year. Scribbling on a piece of paper, he tucked it into a blue envelope and pushed it toward the camera, saying “here’s the winner.”

But not long after the awards ceremony finished, the executive popped up in real life to browse the group’s sprawling booth at the Vivatech fair. Accompanied by his son Alexandre Arnault, the luxury titan made several stops, checking out the fabric resale platform Nona Source, Hublot’s digital warranty certificate system, Dior’s virtual try-on application — which sticks a visor over a person’s image on the screen — and a connected watch at Tag Heuer and packaging at Hipli. He also exchanged with Bambuser chief commercial officer Sophie Abrahamsson, who offered him a demonstration before they posed together for a photo. 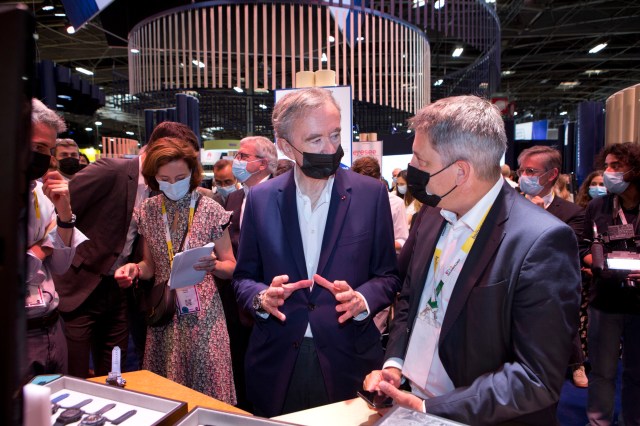 Bernard Arnault at the Hublot stand at Vivatech.  Franck_Mura

Bambuser helps retailers with live video shopping, a trend that started off in China around 2018, according to Abrahamsson. The start-up touts the channel as useful for building communities, allowing retailers to host shows with staff or external experts, while consumers can interact with comments and likes. Retailers can also use the medium to drive transactions through discounts, promotion codes and exclusive offers.

Asked what he was most excited about at this year’s edition, Arnault enthused, “The winner — it’s terrific.”

“See you Monday,” someone called out as he began heading away from the booth. Arnault paused.
“Monday — it’s the big day for La Samaritaine,” he answered, moving out into the maze of the fair, his entourage in tow.

LVMH inaugurates its La Samaritaine complex next week, the culmination of a 750-million-euro refurbishment project that has lasted over a decade.