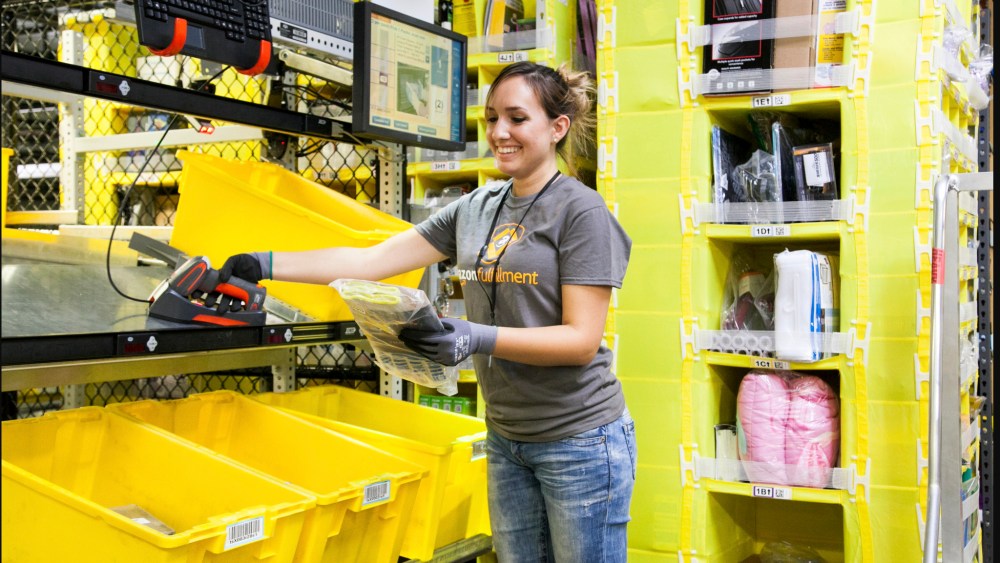 Whatever Walmart Inc.’s ambitions are for its online business, apparel will be key.

As the world’s largest retailer moves aggressively to close the gap with Amazon, the battleground between the two Goliaths is likely to involve apparel to a large extent, observers say.

The Bentonville, Ark.-based behemoth “can’t be all about grocery,” said Carol Spieckerman, president of Spieckerman Retail. “Apparel is still the key to a higher-margin business to offset some of the investment [Walmart is making] in grocery and digital. It makes sense that they would up their game and be mindful of what they’re leaving on the table. Looking at Amazon, and their massive push into private brands, many of them are in the apparel area.

“A more controllable route would be to start focusing on their own higher margin apparel brands,” Spieckerman added. “That could be signaling a revisiting of their private brand portfolio just as they’re doing in home and carving out a more distinct apparel perspective, rather than continuing to double down on high volume basics.”

Target and Amazon are outpacing Walmart in terms of the sheer number of brands each is developing in-house, Spieckerman said. “With Amazon, you have to believe their strategy is to go for more breadth than depth and go full-on digital and scale with their own brands,” she added. “They’re saying, ‘Let’s create this onslaught of private brands across all different channels and product types.’ None of Amazon’s labels will achieve massive volume. Amazon doesn’t want them to emerge as top apparel brands. I call them ‘secret brands’ because the pride of association isn’t there.”

Walmart, on the other hand, has an opportunity to create “all types of brands and ask suppliers to create brands and give preferential treatment to them,” she said.

The importance of apparel to both firms’ strategies is one of the main reasons observers dismissed reports that Walmart is looking to sell either Bonobos or ModCloth. A recent report by Recode, picked up by numerous other media outlets, quoted sources as saying Walmart’s online business in the U.S. reportedly lost $1 billion last year and said e-commerce chief executive officer Marc Lore is under pressure from Doug McMillon, Walmart’s ceo, and its board to sell off at least one digital fashion brand. Walmart bought ModCloth and Bonobos in 2017.

But retail and e-commerce analysts and longtime Walmart observers contacted by WWD found the scenario unlikely.

“Amazon loses a heck of a lot more money than that,” said Sucharita Kodali, vice president and principal analyst at Forrester. “To be competitive in e-commerce, you have to invest in it. You’re damned if you do, and damned if you don’t. Losing $1 billion in the scheme of things is nothing to Walmart. They’re making that up in another part of the business — that’s exactly Amazon’s playbook.

“The board putting pressure on [Lore] is bulls–t,” Kodali added of the Recode story. “Wherever this nonsense came from, it was somebody who was not authorized to speak.”

Walmart U.S. e-commerce declined to comment for this article.

When it comes to retail and e-commerce, the two giants have nearly the opposite capabilities and deficiencies. Recode reported that Amazon operates 110 fulfillment centers in the U.S. and said that Walmart has 20 at most. However, a report by MWPVL International logistics consultants said Walmart actually has 173 distribution centers, including 42 regional ones.

Walmart has been leveraging as fulfillment centers its more than 5,000 U.S. stores, which are within 10 miles of 90 percent of Americans. By contrast, Amazon, through its 2017 $13.7 billion acquisition of Whole Foods Market, operates 500 brick-and-mortar units.

“The better-run brick-and-mortar retailers were willing to take the risk and make the necessary investments and follow the Amazon playbook,” said Moody’s lead retail analyst Charles O’Shea. “When Doug [McMillon] made an [e-commerce] presentation at the New York Stock Exchange in 2015, the stock got hammered. I said, ‘This is exactly what the company needs to do.’ I think that’s playing itself out. I used to get calls about Walmart’s failed online business. You have to invest online, in stores, price and people, and that’s exactly what Walmart’s done. Amazon’s done the same thing, but it’s been given free reign by shareholders. The patience has been astounding.

“Walmart continues to shore up its formidable advantages, particularly in the grocery world,” O’Shea said, adding that Amazon is facing rising challenges that will make it more difficult to sustain its current rate of top-line growth. “It’s increasingly been seeking growth in the grocery business, an area where it is still very much a newcomer in an industry heavily dominated by Walmart, the world’s largest grocer.”

Moody’s estimates Amazon generated $18 billion to $20 billion in grocery-equivalent revenue in 2018, which was dwarfed by Walmart’s estimated $270 billion, which includes Sam’s Club.

Spieckerman agreed that the sale of Bonobos or ModCloth at the behest of Walmart’s board doesn’t ring true. “Walmart.com has made far too many acquisitions to think that they’ve been made without the full consent of the board,” she said. “Walmart took some recent moves to more fully integrate Jet.com into the walmart.com platform and they’ll do the same with the portfolio.

“Jet.com was going to be a safe home for those assets — Bonobos and ModCloth. It would be that there’s a baseline understanding that those brands are best kept at arm’s length of the Walmart brand,” Spieckerman said, noting that the two labels aren’t sold on walmart.com. “So, if Jet.com starts fading away, where will those brands reside? Arguably, they can’t realize their full potential if they’re not being leveraged across the full breadth of Walmart’s scale, including the benefit of physical stores.”

Kodali said that Walmart has a lot of potential to increase its apparel footprint. “Walmart has made a huge business of not selling branded goods and selling to the masses. That’s part of the reason that I think they’ve stagnated. Amazon is one of the main places where people purchase apparel online, but it’s usually not branded, it’s replenishment — generic items such as socks and undershirts. Walmart’s apparel business is still emerging, but they tend to have a [little more] diversity.”

Earlier this month, Walmart demonstrated that it’s capable of developing an ambitious brand with the launch of MoDRN, an exclusive online collection for the modern home featuring nearly 650 items across three collections, including retro glam, refined industrial and Scandinavian minimal. The company said it’s focused on “doubling down on growing its home assortment, starting with high-quality, on-trend collections that can only be found within the Walmart e-commerce family of brands.”

Could apparel be far behind?

According to Kodali, the success of Amazon’s apparel is in question. “I’m not sure Amazon’s private label apparel is doing that well,” she said. “Amazon’s private label is known for hardware such as Amazon Echo and basics like batteries. Their own private label brands may have some traction in food. Nobody really knows what their apparel brands are, and they don’t have a physical presence to expose people to learn about them. Everything is product descriptions and price points.

“Amazon is a frenzy,” Kodali added. “Some desperate brands use it to get some short-term units. You deal with the devil. Some of them have a choice between selling directly to consumers versus Amazon. It doesn’t make any sense to go through Amazon. Some brands are just desperate for units and don’t have much of a direct-to-consumer business. Amazon is cannibalistic. Selling to Amazon is bad supply chain management.”

“Walmart isn’t just sitting back, and neither is Amazon. There’s so much information/disinformation about Amazon,” said O’Shea. “Amazon has demonstrated that it will develop its own products to compete with national brands and other third-party vendors. Amazon has long held a huge lead over other retailers when it comes to third-party vendor sales, and while it continues to aggressively grow this business, Walmart will narrow this third-party gap over time.”