Disrupting the Rental Disruptor With What’s Already There

A do-it-yourself approach to rental.

Wardrobe is a just-launched peer-to-peer clothing rental app service partnering with 40 local dry cleaners around New York, and it argues it has solved existing players’ logistical strains by operating with zero overhead or inventory.

It launches with more than 450 luxury, designer and vintage brands including plus-size and maternity wear, none of which is owned by the company and all of which is cleaned elsewhere. And the majority of its network of local dry cleaners use organic solvents in their dry-clean processes. As WWD previously reported, the app began its pilot last December, first partnering with 12 dry cleaners.

But is disrupting a disruptor (e.g., Rent the Runway) the explicit goal of Adarsh Alphons, founder and chief executive officer of Wardrobe?

“Our aim isn’t to steal market share from Rent the Runway. We’re a whole different type of offering: We carry luxury, vintage and items that are totally unique,” said Alphons, citing how each closet is a curation of style by its owner, that is then circulated by Wardrobe.

Before Wardrobe, Alphons founded ProjectArt Inc. an organization that is reported as the largest art school for kids in the U.S., all without owning a single building.

Wardrobe was founded in 2018 and has $1.5 million in seed funding led by angel investor and entrepreneur Cyan Banister, who was an early seed investor for Uber and SpaceX, among other investors.

“Fashion, if done right, is a highly scientific field. A lot of data scientists and mathematicians are leaving their jobs in academia, in particular, space research and joining companies like Stitch Fix,” said Alphons.

While a recent survey from CGS, a global provider of business applications, found that adoption levels among apparel rental services is still low at just 8 percent of its over 17,000 participants having considered or used a service, there is still value in a good idea.

Still, existing mobile-centric resale marketplaces such as Gen Z-approved Depop, Poshmark, Tradesy and more already show user adoption in the millions. Why would consumers join another app instead of just swapping clothing among their friends?

Don’t lend anything for free.

Wardrobe lenders get paid per garment, making 70 to 75 percent of the rental revenue after cleaning and delivery costs. The service is rent-by-date at this point and no subscription is currently offered.

Alphons shared how most users who rent, aspire to lend next — exhibiting the “flywheel” effect that has contributed to The RealReal’s success. The metric Wardrobe looks at is the revenue impact of each of its lenders and dry-cleaners, as well as the input of new items and customers retained.

In localizing its logistics and trending its rental supply by word-of-mouth and unique offerings — especially from its influencers (e.g., Alyssa Coscarelli, former Refinery29 editor-turned-freelancer is a user) closets — the predominately Millennial and Gen Z style seeker community also doesn’t have to forgo their relationships with their local dry cleaner.

But the push of “influencers” isn’t enough to validate a new start-up to market, as the business case must always usurp the hype — and costs to operate.

Alphons said “anything above 30 percent margin would put us on a great path,” referencing how the company is fully integrated without costs of inventorying, warehousing or dry-cleaning, also adding that all growth has been organic.

But there is still more widespread consumer adoption of rental needed to exacerbate an impact. The Ellen MacArthur Foundation, under its Circular Fashion Initiative, said if the number of times a garment is worn was doubled on average, GHG emissions would be 44 percent lower. The mission is to ensure that those clothes get worn again.

The Wardrobe app guidelines warrant a 90-day rent time for garment loans from its users, with priority over like-new, tagged and designer luxury items. Vintage is also up for lending by the service whereby Wardrobe will ensure items are cleaned, cataloged and stored for free, and the precious wares of its lenders are backed with insurance in the case of damage, loss or theft.

During its nine-month beta testing, the company found high repeat customer usage with the average customer renting over four times in their first six months on the app. Month over month, the company’s number of orders and revenue have shown consistent growth, to the benefit of the lenders and dry-cleaner partners who also rake in income, (reportedly tens of thousands within the testing period).

As with any rental model, faster returns mean better control of inventory levels, with speed and convenience enhanced by multiple drop-off locations and local couriers networks.

In this case, Wardrobe is aiming to innovate an already disrupted sector by using what’s already there, (including a potential confusion over its name — a direct-to-consumer luxury brand by the name of Wardrobe.NYC supported by Gigi Hadid, Jen Atkin, Virgil Abloh, had it first), but if anything, mobilizing idle capacity is a theme sure to continue as both the sharing and circular economy take root in fashion. 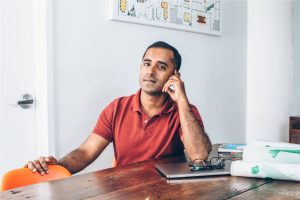 Clothing for Rent: Here’s What Brands Need to Prioritize

Rent the Runway Is a Unicorn With Growing Pains