For a young designer just starting out, the Web can be the perfect stepping stone from nothing to something. 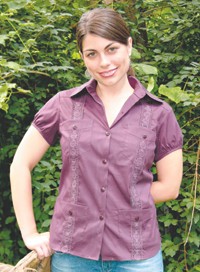 For a young designer just starting out, the Web can be the perfect stepping stone from nothing to something.

Debra Torres learned this when she couldn’t get boutique owners interested in her contemporary guayabera shirts for women, but found there was a ready customer online.

She paid a friend of a friend $1,000 to put up a marketing site. When her attempts to go the traditional route through a showroom rep and working trade shows failed to capture orders from boutique owners, she paid the Web designer another $1,000 to put up a shopping cart using PayPal. Several editorial mentions in glossy magazines later, the site was taking in several thousand dollars a month.

The shirts retail for $109 to $199 and come in such fabrics as stretch cotton and iridescent silk taffeta. They are made in New York.

Torres launched her Web store in November 2005 and recently expanded the site with more designs, men’s wear and bags. She plans to add more accessories from a variety of designers in the hopes of making the site a destination for brands that blend Latin tradition with modern fashion.

“There is so much interesting product out there” from countries as diverse as Argentina and Venezuela, she noted.

Torres was born in Cuba and grew up in Miami. She studied at Parsons School of Design (now Parsons The New School for Design), worked at Christian Dior and Neiman Marcus and received a business degree from Columbia University.

She advises other business owners to find a Web site designer with a compatible aesthetic sense. “The most important thing is to find someone who has the same vision and understands what you want,” she said. “You trust they will produce what you’re looking for.”

Her direct approach is easier and less expensive than the traditional route of hiring a showroom rep and working trade shows, she said. But once the Web site goes up, it still needs to be marketed. One option is to try to get as many products as possible mentioned editorially in magazines, because that’s one of the biggest drivers of traffic and awareness. Another is to partner with other fashion sites and blogs, and ask them to feature the products, Torres said. Also, it is important to have a way for Web site visitors to contact the designer. An 800 number and other contact information online are key. Small companies will need a way to capture visitors’ e-mail addresses, so they can contact potential customers.

“Most stores are not trendsetters,” Torres said. “They’re just following the trends, so until your item becomes trendy, it’s not interesting to them. At the same time, you can sell your product to a customer, but how to get to them? The Web lets you do that.”