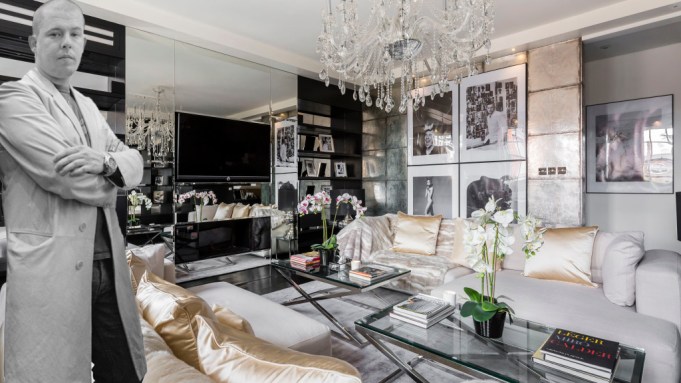 A London penthouse that once belonged to the late Alexander McQueen and was designed by its current owner in homage to him has had another price cut.

Before he tragically took his own life in 2010, the British fashion designer purchased a town house in London’s posh Mayfair neighborhood for a reported 2.53 million pounds. He was planning on transforming it from apartments back into a single home for himself, but sadly never got to see his plans through.

After his death at his other nearby apartment, the lower floors of the six-story property were acquired by an investor, repackaged and sold in 2013.

The upper part of the house was later snapped up by another private buyer, who turned it into a 1,790-square-foot duplex penthouse that pays homage to the fashion designer’s life and style.

The duplex, which is just a stone’s throw away from Hyde Park, went on sale in November 2016 for 8.5 million pounds, only to be later reduced to 7.5 million pounds. It then disappeared from the market, but has just been put up for a sale again with a much lower six million pound price tag and a new listing agent — Fine & Country.

The current owner hired Paul Davies London to design the penthouse’s interiors in homage to McQueen. The result is a home decorated with portraits of McQueen and his muses Annabelle Neilson and Isabella Blow, as well as images of his iconic clothing.

Other features include two bedroom suites on the upper floor, as well as a roof terrace, for which McQueen gained planning permission, though he never saw it completed.