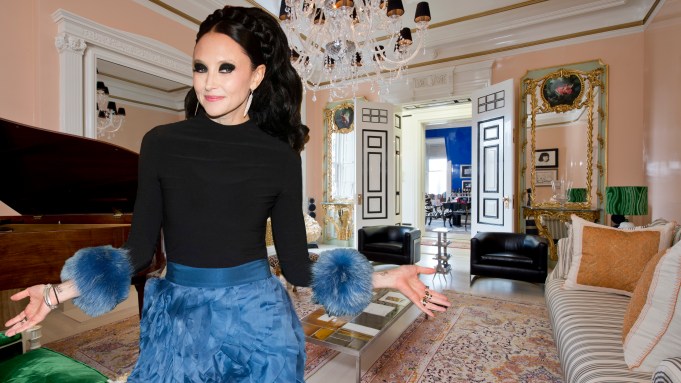 Manhattan’s exclusive Dakota building has got itself a fashionable new resident as Alice + Olivia cofounder, chief executive and creative director Stacey Bendet has picked up two side-by-side apartments at the iconic Upper West Side address.

The first is a pretty spectacular nine-room spread that was last asking $10 million and was once reportedly home to Judy Garland, although no one has been able to officially confirm that fact.

Most recently, it was owned by late socialite Jacqueline Bikoff, who commissioned her interior designer daughter Sasha Bikoff to redesign the place, with standout features including a formal dining room that overlooks the building’s central courtyard and a library.

At the same time, Bendet and her husband, producer Eric Eisner whose father was the former chief executive officer of Walt Disney, also scooped up another three-bedroom unit next door and while the price paid for that is unknown, it was last asking close to $7 million.

The seller of that pad was “Killing Me Softly With His Song” singer Roberta Flack, who decked it out with a lot of mirrored walls, while maintaining many original details such as moldings and shutter-framed windows.

It also boasts a juliet balcony that spans more than half the length of the apartment, as well as impressive views of Central Park from a set-back bay window in the main living room.

Bendet will be joining the likes of TV power couple Maury Povich and Connie Chung, and author Harlan Coben, who also live at The Dakota. Its most famous past resident, however, was John Lennon, who was sadly killed in 1980 in the building’s archway. His wife Yoko Ono still lives in the same apartment.

While Bendet clearly got approved by The Dakota’s notoriously picky co-op board, others have not been so successful, with Melanie Griffith and then husband Antonio Banderas, Cher, Madonna and Billy Joel all being turned down over the years.

A spokesperson for Bendet declined to comment on the sale.