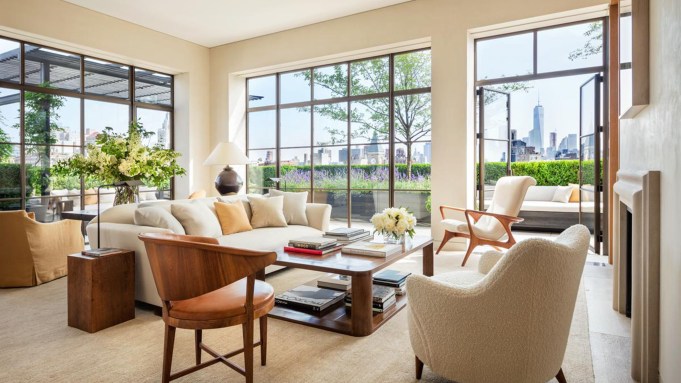 Andrew Rosen has made another big life change.

After stepping down from Theory Inc., he has just sold his longtime home in Manhattan’s Greenwich Village neighborhood to a wealthy financier, Long Light Capital’s Justin Korsant, property records showed.

At $18.5 million, the sale price for the luxe full-floor penthouse marked quite the jump from the $13 million Rosen spent on the pad in 2012.

As well as rising Manhattan property prices, the increase is partly due to the expensive renovation Rosen made to the apartment — no doubt led by his interior designer wife Jenny Dyer.

The two-bedroom, eight-room apartment is certainly a show stopper, with terraces off every room boasting views of the city. This includes the master suite, whose terrace is hedged with tall hornbeam trees, making it a “private outdoor room,” as the listing puts it.

Elsewhere, there’s a grand living room with a wood burning fireplace, an oak-paneled study and a gym, while outside lies a trellised seating area.

The apartment is located in the exclusive Greenwich Lane complex, a mixture of town houses and condos spread across five separate buildings that were once part of the old St. Vincent’s Hospital. Other residents include Michael Kors, Tamara Mellon and German model Toni Garrn.

It’s not known if Rosen is eyeing another Manhattan property, but he has at least two other properties he can decamp to — a house in Southampton and an apartment in the Four Seasons Residences at the Surf Club Miami that he paid $5 million for in 2017.

As exclusively reported by WWD last month, Rosen stood down as chief executive officer of Theory at beginning of the month and was succeeded by Dinesh Tandon, former chief operating officer. Rosen will remain an adviser.

The listing broker was Leonard Steinberg of Compass, while Brett Mitchell of the same agency acted on behalf of the buyer. A spokesman for Rosen did not immediately respond to request for comment.