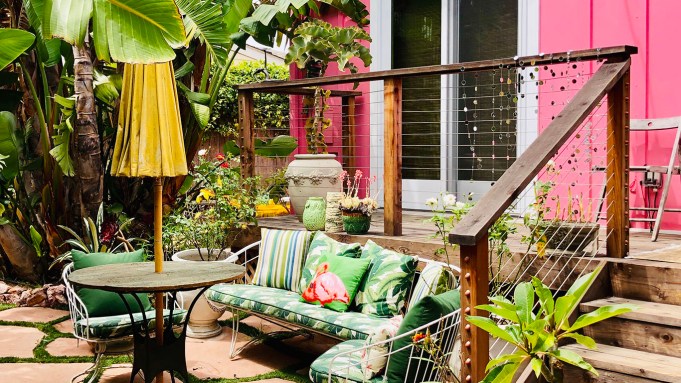 One might imagine a famous fashion designer who has been in the business for decades enjoying their later years in a sprawling mansion.

Not Betsey Johnson. Never one to follow the norm, the 77-year-old designer has spent the last three-and-a-half years living in a mobile home in Malibu, after a particularly bad cold snap on the East Coast persuaded her to sell her Upper East Side apartment and Hamptons house and relocate to Los Angeles.

But the mobile home in question might not be all that it seems as Paradise Cove is no ordinary trailer park.

In fact, homes in the exclusive enclave nestled in a bluff overlooking the Pacific Ocean can sell for millions, with buyers attracted by the views and luxe amenities such as 24-hour guard-gated entry, a tennis court and clubhouse, as well as access to a private beach.

Johnson, for one, has clearly adjusted to life there as she told WWD she is planning on staying.

She has decided she needs more room, though, so she will be upgrading to larger home, and put her current one — known as “the little pink trailer” on the market for $1.95 million.

Known for her brightly colored outfits, the home that she’s selling, which she designed herself, is no exception.

In addition to the pink exterior, there’s a double-size master bedroom dubbed “The Yellow Room” decked out head to toe in an acid yellow hue, a bright turquoise bedroom, a plethora of colorful rugs (including an original from Pucci), and trinkets and flashes of animal print throughout.

The quirkiness continues outside where visitors will find a bathtub located in the garden, as well as an outdoor living room, both surrounded by tropical landscaping, which was modeled on the Beverly Hills Hotel.

Johnson also owns a luxurious four-bedroom, six-bathroom villa in Mexico, known as “BetseyVilla,” which she rents out for $600 per night on Airbnb.

She remodeled that three years ago and the results are extremely “Betsey,” with pictures of her as well as her original drawings and artwork dotted around the villa, while her knick-knacks that she has collected over the years fill various rooms.

Betsey Johnson and The Nineties Are Back