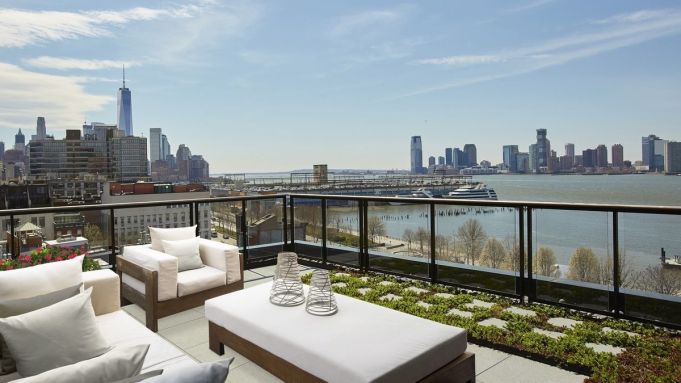 Being the beauty box originator has certainly paid off for Birchbox cofounder Hayley Barna, who just dropped almost $14 million on a Manhattan apartment.

Barna’s new pad is at 150 Charles Street, a celebrity-filled condominium in the heart of the West Village, where other owners include Jon Bon Jovi, Ben Stiller and Irina Shayk.

The latter two both rent their places out, while Bon Jovi, a savvy real estate investor as well as an international rock star, is trying to sell his duplex home with views of the Hudson River for almost $16 million.

Barna will also be joining high-powered business executives such as Intermix’s cofounder Haro Keledjian and Hard Rock Café cofounder Peter Morton, who also have apartments at the 91-unit condominium.

Perhaps she’ll be able to pick their business brains if she bumps into them in some of the building’s shared amenities, which include a 75-foot lap pool, residents’ lounge and children’s playroom.

According to the listing, Barna’s new three-bedroom, 3,031-square-foot home, which was asking $16.995 million, comes with a 445-square-foot landscaped terrace, while floor to ceiling windows overlook Hudson River Park and Manhattan’s skyline.

She set up Birchbox, an online service that sends subscribers beauty products, in 2010 with fellow Harvard graduate Katia Beauchamp and it now operates in the U.S., Spain, the U.K. and France.

Barna left Birchbox in 2015 and joined First Round Capital, venture capital firm with early investments in Uber and Blue Apron, as its first female partner the following year.

She did not respond to a request for comment.