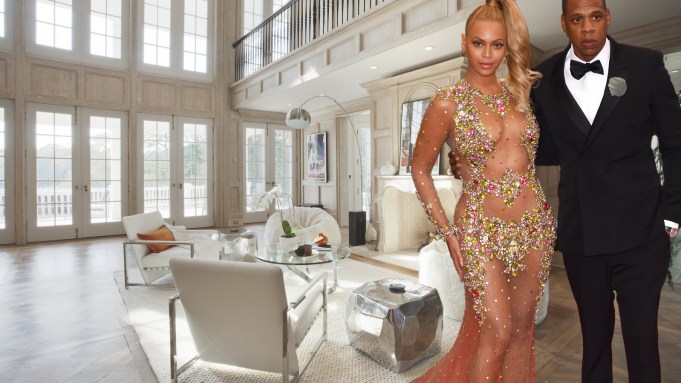 Despite dropping a serious amount of cash on a Los Angeles megamansion after relocating to the West Coast, it appears that Beyoncé and Jay Z aren’t completely done with the East Coast.

The duo are reportedly the mystery buyers of a Hamptons mansion called Pond House where their new neighbors include the likes of Martha Stewart, Steven Spielberg and Russell Simmons.

The seller must be particularly happy to be able to finally wave goodbye to the house, located on coveted Georgica Pond in East Hampton, as it has been on the market for eight years, first at $39.5 million.

They were last asking just under $29 million, but Beyoncé and Jay Z are apparently tough negotiators as it reportedly sold for $26 million, although the final price paid won’t be made public until the sale has officially closed.

The music power couple’s new 12,000-square-foot abode comes with seven bedrooms and nine bathrooms, meaning that there will be more than enough space for their three children — five-year-old Blue Ivy and newborn twins, Rumi and Sir.

According to the listing, the main house has “museum-quality” 18th-century French Louis XV carved stone fireplaces, hand-pegged parquet de Versailles floors throughout, created and installed by French craftsmen, as well as a a wrap-around Turkish limestone terrace.

Elsewhere, there is a detached two-bedroom guest cottage, which could house their celebrity friends when they come to visit, as well as an infinity pool and spa right next to the pond.

This comes not long after they paid $88 million for a sprawling Bel Air spec home in an off-market deal, for which they had to take out a $52.8 million mortgage despite being worth more than $1 billion combined.

The contemporary manse, which sits on two acres of land, is made up of four separate structures and boasts 30,000 square feet of living space. It has not one but four outdoor swimming pools, a wellness center, a full-sized basketball court and staff quarters.

Reps for Beyoncé and Jay Z did not respond to request for comment.