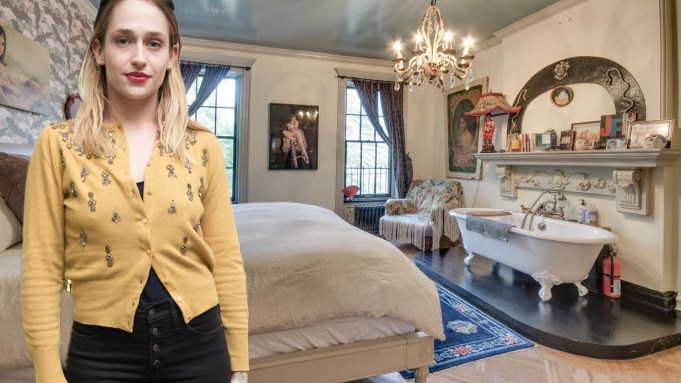 “Girls” actress Jemima Kirke was previously quoted as saying that she swapped her beloved Lower East Side in Manhattan for a more family-orientated Brooklyn neighborhood once she had children.

The mother of two first landed in Brooklyn Heights, before ending up in an enviable Carroll Gardens town house complete with a garden and roof terrace — quite a step up from the modest Greenpoint apartment her alter ego Jessa Johansson lived in at the end of “Girls.”

But maybe the 32-year-old actress and artist has had a change of heart about living in Brooklyn, since it appears she is ready to part company with her quirky four-bedroom, 3,360-square-foot town house, listing it for sale for a touch under $5 million.

This is quite a jump from the $2 million she paid for it in 2013, but the price increase no doubt reflects all the work that has been done on the 19th-century brownstone, including a gut renovation.

While the property has her bohemian touch all over, perhaps the quirkiest feature can be found in the second-floor master suite, where a freestanding tub has been put in front of the bed and not in the en suite bathroom, as one would expect.

As part of the master suite, which takes up the entire floor, there is also a walk-in closet and an enormous private dressing room, where her array of clothes — and likely treasures from her mother Lorraine Kirke’s now-closed West Village vintage boutique Geminola — are displayed.

There are another three bedrooms on the third floor, two of which have been brightly decorated for her son and daughter, as well as an open-plan living area and kitchen that leads to a large covered terrace on the main floor.

There’s also a basement with an office and nursery, while at the other end a roof terrace “retreat,” surrounded by panoramic views of lower Manhattan, is located.

A representative for Kirke, who revealed last year that she was separating from her husband, Michael Mosberg, did not respond to a request for comment. The listing agent is James Joshua Viscardi of Brown Harris Stevens.