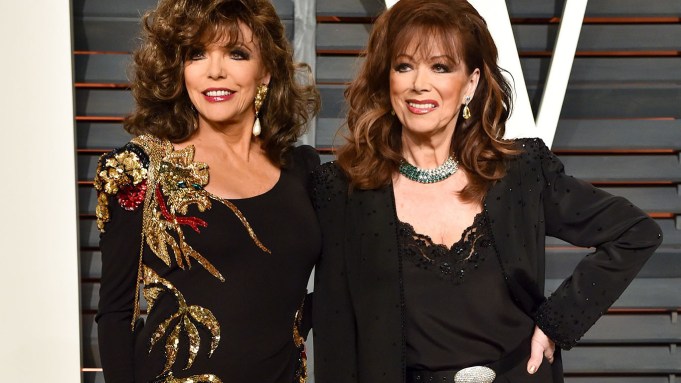 Glamorous British sisters Joan and the late Jackie Collins made headlines for decades in Hollywood and it seems they are still hot property as both their Los Angeles homes were snapped up just days after hitting the market.

Popular romance novelist Jackie’s four-bedroom, five-bathroom Bel Air home, asking $4.95 million, was only listed for sale at the beginning of June but entered contract just over a week later on Monday.

WWD understands that Jackie, who wrote 32 novels during her long career and died in 2015 at age 77, never lived in the 4,150-square-foot single-story house and instead offered it as a high-end rental, with monthly rent as high as $18,000 at one point.

The brick property is situated on park-like grounds and comes with a formal dining room, spacious living room with vaulted ceilings and fireplace, a wood-paneled study and a heated swimming pool, according to the listing.

This was the last of her four homes that she owned to be put up for sale. Jackie’s main residence, which was a 21,784-square-foot mansion, was sold to commercial real estate investor Ben Nehmadi last year alongside her smaller neighboring house, which had long been rented by Al Pacino, for a combined $30 million.

Her older sister Joan, most famous for her portrayal of Alexis Carrington in “Dynasty,” put her two-bedroom West Hollywood condo on the market at the end of May, asking $4.495 million.

That, too, has already found a buyer, but like her sister’s property the final price paid won’t be made public until the sale has officially closed.

It’s on the 25th floor of the celebrity-filled Sierra Towers (Sandra Bullock, Courteney Cox and Kelly Osbourne are also thought to have homes there) and boasts nearly 2,300 square feet of interior living space, and a large outdoor terrace with views of Beverly Hills, the Pacific Ocean and beyond.

Joan and her fifth husband, Percy Gibson, reportedly also own homes in London, the south of France and New York.