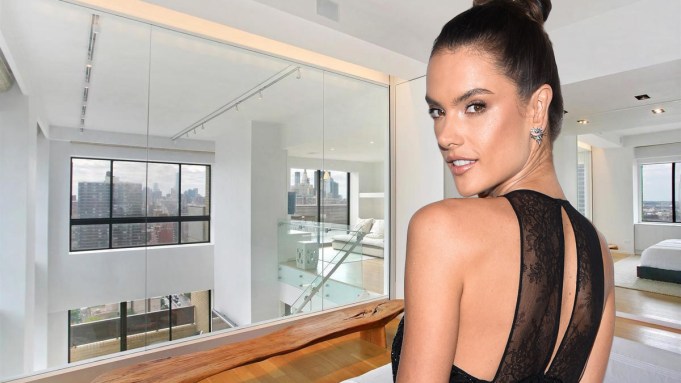 Supermodel Alessandra Ambrosio recently hung up her Victoria’s Secret wings to focus on her acting career, but that’s not all the former Angel will be doing.

WWD has learned that the 36-year-old Brazilian beauty will also be continuing her other job of New York City landlord, recently listing her luxe Midtown East penthouse for rent for a pricy $12,250-a-month.

Ambrosio paid close to $1.9 million for the three-bedroom duplex in 2005, five years after she signed her first lucrative Victoria’s Secret contract, and has been offering it as a rental for at least the past few years while living in Los Angeles with her family.

Per the listing held by Corcoran’s Alexander Pisa, she has fully renovated the three-bedroom duplex since buying it, with the help of renowned Brazilian architect Arthur Casas.

The results are 25-foot high ceilings, sleek white furnishings and an abundance of glass — the master bedroom features a large glass wall overlooking the main living area, while part of the staircase is glass.

Other features include a wood burning fireplace, wooden floors throughout and huge custom fitted walk-in closets with dressing areas. There’s even a small angel statue in the corner of the living room — a reminder to the tenant of their landlord’s Victoria’s Secret past.

As well as 1,600 square feet of living space inside, there’s also a huge wrap-around terrace and an additional balcony. The penthouse is on the 29th and 30th floors of the Whitney Condominium so the views of the New York City skyline and East River are pretty impressive.

This is not the only home that Ambrosio, who Forbes calculated made $5 million in 2016, owns. According to property records, Ambrosio also has another apartment in Murray Hill, which she paid $405,000 for in 2005 and a house in Santa Monica that cost her $6.5 million in 2012.

Ambrosio isn’t the only Angel making New York real estate moves. Adriana Lima is still trying to sell her plush apartment near Central Park after a big price cut, while Jasmine Tookes is selling her six-bedroom East Hampton spread for a little more than $1 million.