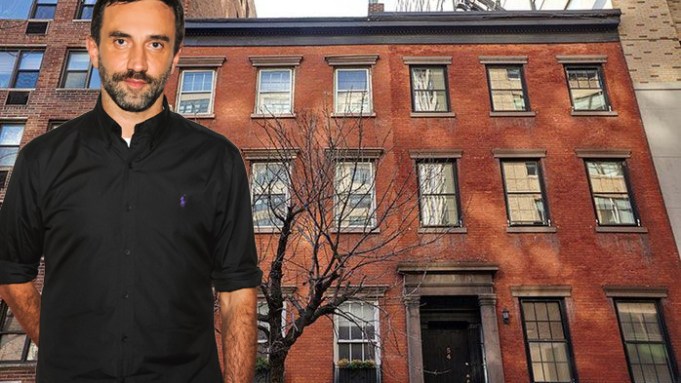 London calling! Riccardo Tisci has put his stylish New York town house up for rent as he readies for a move to the U.K. capital to become Burberry’s chief creative officer.

The Italian fashion designer, who stepped down as Givenchy’s creative director last year, bought the two-unit brownstone in SoHo’s Hudson Square in 2011 with close friend and collaborator, artist Marina Abramović.

After renovating it, the plan was for Tisci to take the top three-story apartment and Abramović would have the duplex below, but he was too busy to move in and she eventually sold her share to him as she was lonely in the house by herself.

Since then, Tisci, who also owns a Paris apartment, has been renting out Abramović’s former pad and not his, but this changed earlier this week when he listed the two units together for a combined $24,500 per month, just days before it was announced today that he would be replacing Christopher Bailey at Burberry.

Both apartments are also available separately for $13,000 and $15,000 respectively and per the listing, Abramović’s former spread is an understated duplex that has high ceilings, wooden floors and spotlights throughout and what is described as a “zen-like garden” that is accessed though floor-to-ceiling glass.

The garden used to open out to a lap pool, a rarity for the area and an amenity Tisci previously said he was very “lucky” to have in the middle of the city, but the listing makes no mention of it, raising the question of whether he got rid of it.

Tisci’s two-bedroom apartment, meanwhile, has similar furnishings, but comes with a terrace overlooking the garden. Those hoping to take a peek at his interiors will be disappointed, however, as listing images show its empty.

Bailey has also made real estate moves since revealing his Burberry departure. At the end of last year, he sold his plush seven-bedroom home in London’s posh Kensington neighborhood for 18 million pounds to Formula One Champion Lewis Hamilton.