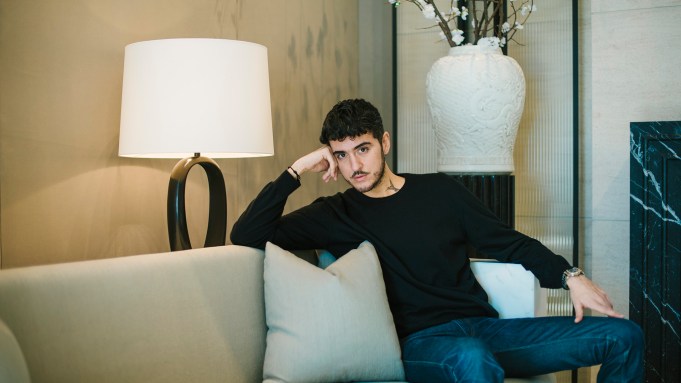 One thing is for certain: Ryan Korban has been the “in thing” in interior design among New York’s fashion set for some time.

Over a decade ago at 22 and fresh out of college (Parsons, obviously), he opened and designed TriBeCa accessories store Edon Manor in the style of an English country house with a former classmate. Ever since then calls from stylish clients have kept coming.

But his most loyal client to date has to be Alexander Wang. The two met when they were both at college and not only did Korban furnish Wang’s TriBeCa loft with zebra rugs and furry chairs, his services were also called upon for the designer’s flagship store in SoHo, as well as Balenciaga’s Mercer Street digs when Wang was still at its helm.

“When I started I turned to the fashion world because the design world wasn’t ready for someone so young. The budgets are so high and so you need a certain level of trust,” the AD100 designer says. “In the fashion world, you have young people starting T-shirt lines or whatever so there’s less pressure in terms of what the capital is for these projects to happen.”

But a few years ago, the Philadelphia native decided he’d done enough to make his mark on the fashion world and was ready to sink his teeth into a much bigger project.

Combined with that, he felt like retail executives were plowing more of their budgets into digital strategies than bricks-and-mortar, so it felt like a good time to make the jump to real estate and try to get involved in a condominium.

“I had come off doing a lot of retail and I was doing a ton of stuff with Balenciaga at the time and that was sort of coming to a closing chapter. I really felt like I wanted to focus more in the real estate world,” Korban says.

There was just one issue with that plan: He was virtually unknown by those in that field and unlike the fashion world, New York real estate developers were not lining up around the block to hire him.

They were skeptical about his age — he’s now 34 — and lack of experience in the sector and he was put through his paces by several well-known developers before he finally secured his dream gig – 40 Bleecker, a luxury condominium in Manhattan’s NoHo being built by Broad Street Development.

That wasn’t an easy sell at first either, according to Douglas Elliman’s John Gomes, who is handling the building’s sales alongside Fredrik Eklund of “Million Dollar Listings” fame. “It was kind of difficult at the onset. But people who knew, who were kind of following what Ryan was doing, kept urging,” Gomes says.

Flash forward two years and that all seems like ancient history as Korban, dressed in his signature black top and jeans, proudly shows off his duo of handmade statuary marble sofas and French limestone slab coffee table in the no-expenses-spared newly opened, 2,000-square-foot sales gallery.

It’s being used to show potential buyers what the real thing, which is just starting to emerge from the ground around the block, will look like when completed in 2019. The finished product will rise 12 stories and house 61 one- to five-bedroom residences, with prices starting at almost $1.8 million for a one bedroom and $6.3 million for a three bedroom.

As well as the lobby, which the sales gallery mirrors, all of the building’s apartments’ finishings and amenities — including a 57-foot swimming pool, a state-of-the-art exercise room and stretching studio — will be the handiwork of Korban, who at the same time is also working on creating his own furniture line.

Given complete control of 40 Bleecker’s interiors by the developer, he drew much of his inspiration from the building’s location, which looks out from its corner units onto Lafayette Street — what he views as the gateway between downtown and uptown as it turns into prime Upper East Side address Park Avenue.

“I think that there’s a buyer who’s in the neighborhood that’s maybe looking for something really cool and still elegant. I also think there may be someone from uptown who wants to live a kind of more downtown lifestyle, but doesn’t want to compromise on a certain level of lifestyle.”

With all this in mind, he knew his work needed to speak to a new generation of downtown buyers, who are looking for luxury and elegance against a modern backdrop.  The answer? Masculine contrasts with feminine, traditional with modern and soft with brutalist, he says, adding that bridging the gap between uptown and downtown styles has become somewhat of his specialty.

“I’ll have a brand like Fivestory come to me to do a store uptown because they want me to do something that’s classic but infuse something edgy and cool to bring uptown,” he tells WWD. “Then I’ll have a brand like Balenciaga, who’s really old and established, have me come downtown because they know I’ll understand how to elevate and so, that really became the premise of it.”

While this has all been going on, Korban has not forgotten his fashion roots. In fact, he brought the two worlds together recently when his longtime friend, designer Brandon Maxwell, shot his spring campaign, featuring British model Jourdan Dunn and her eight-year-old son Riley, at 40 Bleecker’s sales gallery.

“When I built it I went to Brandon and I said, ‘Your collections are beautiful. I have a beautiful space,’” he says. “He’s just another young creative person who said, ‘I love this space’ and got it. It wasn’t this preconceived thing of, this is real estate or this is this or this is that.”

As for which world is going to be his main focus from now on, Korban diplomatically says he wants to achieve a “good balance” and that for him retail is “still such a fascinating world” to which he’ll be forever grateful.

“I really owe it to the fashion companies like Balenciaga, like Alexander or like those companies who trusted me and gave me that experience to then have the design world really say, he’s young but look at these brands that he’s worked with,” Korban says. “It was really the fashion world’s kind of openness to young talent that was really what started my career.”