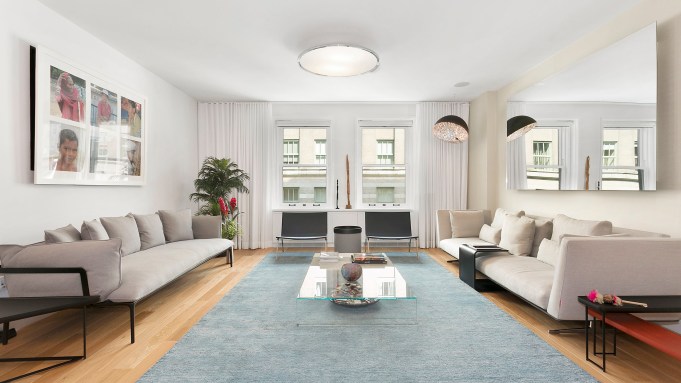 Now that Craig Leavitt, who has just stepped down as Kate Spade’s chief executive officer, has a lot more time on his hands, it appears that he has turned his attention to selling his swanky Manhattan pad.

The fashion exec just listed his three-bedroom, 2,409-square-foot TriBeCa apartment for $6.3 million, over $1 million more than he paid for it in 2015 after selling a loft in the celeb-filled Chelsea Mercantile.

The apartment for sale is located at the 33-unit Sterling Mason building on Laight Street, which was designed by architect Morris Adjmi and whose amenities include a 24-hour doorman, a fitness center, a library and a playroom.

Overlooking Greenwich Street and the Deborah Nevins garden, Leavitt’s apartment has a leather-paneled entrance foyer, floor-to-ceiling French doors in two of the bedrooms and a Juliet balcony in the master bedroom.

According to listing agent Linda Feder of Corcoran, he put in a number of upgrades to the property, including a television in the living room hidden beneath a movable painting and one that rises hydraulically in the dining room.

Leavitt stepped down from Kate Spade at the beginning of August following Coach’s acquisition of the brand and is yet to announce his next move. Prior to joining Kate Spade, he was president of global retail at Theory.

He earned himself a tidy $9.8 million as ceo of Kate Spade in 2016, although this was down from $10.4 million the previous year.