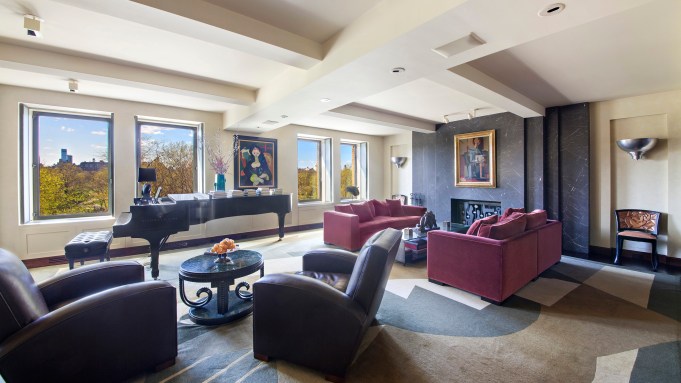 The likelihood is that you’ve never heard of Desmond Child, but you will almost definitely have heard of his songs.

The Grammy-winning songwriter and music producer is behind a number of famous tracks, including Bon Jovi’s “Livin’ on a Prayer” and “You Give Love a Bad Name,” Ricky Martin’s “Livin’ La Vida Loca,” and Katy Perry’s “Waking Up in Vegas.”

All that work has certainly paid off as the songwriter, who spends most of his time in Nashville, was able to buy a full-floor Fifth Avenue co-op apartment overlooking Central Park in Manhattan in 2010, which he has just listed for sale, asking almost $4.5 million.

The newly renovated three-bedroom apartment is in the posh 16-story co-op building Brisbane House and has its own private elevator entrance, a wood-burning fireplace and views of Central Park from several rooms, including the living room and the master bedroom.

Perhaps unsurprisingly for a man whose career has always been in the music business, it also has a state-of-the-art Crestron integrated surround audio system with built-in speakers all through the apartment.

The limestone-clad pre-war Brisbane House was developed and built in 1928 by journalist and columnist for Hearst newspapers Arthur Brisbane. Amenities include 24-hour doorman, a private courtyard, as well as a gym.

The listing agent is Louise Phillips Forbes of Halstead.

For More Real Estate Scoops From WWD, Check Out: