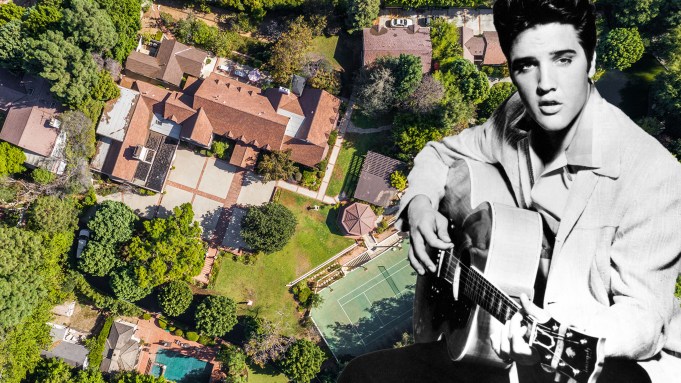 A grand Los Angeles estate that once belonged to Elvis and Priscilla Presley has hit the market for $35 million.

While a fancy Trousdale Estates house is best known as having been the former couple’s West Coast base, the duo also lived for a while at a plush Holmby Hills mansion on Monovale Drive, colisting agent Jeff Hyland of Hilton & Hyland confirmed.

It is widely believed to have been some time during the late Sixties or early Seventies, although WWD could not find the exact year that the King of rock ‘n’ roll officially left the building.

The Presleys aren’t the only famous names associated with the house, as it was originally built in 1937 by Oscar-nominated actor Robert Montgomery (father of “Bewitched” star Elizabeth Montgomery) and Blake Edwards of the “Pink Panther” movies also lived here at one point, according to Hyland.

It was last owned by shampoo millionairess Paula Kent Meehan, who died in 2014 age 82 and it is now being sold by her family. She set out to be an actress, but after failing to gain the same level of success as her junior high friend Debbie Reynolds, she joined forces with her hairdresser, Jheri Redding, to launch Redken Laboratories in 1960.

She later bought him out, turned it into a multimillion dollar empire and sold the company to L’Oréal in 1993 for an undisclosed amount. After the sale, she continued to invest in various real estate deals and bought the Beverly Hills Courier weekly newspaper.

According to the listing held by Hyland and Rick Hilton of Hilton & Hyland, the 2-plus acres estate includes a stately Tudor Revival-style house with leaded glass mullion windows, imposing archways and high-pitched roof.

Outside there is a Japanese teahouse and wrap-around koi pond, a tennis court, a pool with pool house and two detached guest quarters, while an adjacent four-bedroom property that was built in 2002 is also included in the sale.