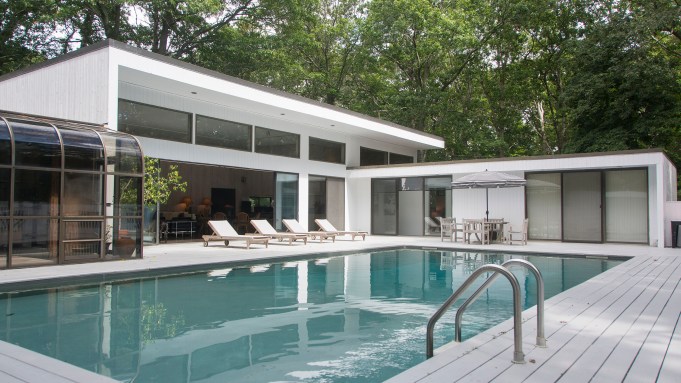 Dishing the dirt on Calvin Klein’s and Halston’s empires has certainly paid off for biographer Steven Gaines if his Hamptons house is anything to go by.

The author, who co-penned the biography “Obsession: The Lives and Times of Calvin Klein” in the Nineties, has just listed his contemporary-style Hamptons house for close to $3 million.

The Wainscott property is where he also wrote part of “Simply Halston,” a biography about the fashion designer that is being turned into a TV series, as well as “Philistines at the Hedgerow: Passion and Property in the Hamptons,” the New York Times bestseller about gentrification of the East End over the last several decades.

“I’ve been a biographer since I was 26 and wrote mainly about rock stars, but decided to start focusing on fashion designers when they became the new rock stars,” Gaines told WWD.

The lavish modern structure was built by its previous owner Bill Higgins, who owned “The Swamp,” the legendary gay club in Wainscott, and was home to many an after party, according to Gaines.

“For years prior, it had been the notorious ‘after party’ house of the gay disco, The Swamp,” he said, adding that a sunken hot tub in the greenhouse off the master bedroom and a flat roof from which revelers would jump into the outdoor heated swimming pool are reminders of those hedonistic nights during the 1980s. “If only the walls could talk.”

Located on Westwood Road in Wainscott and set on 1 acre, other features of the striking four-bedroom, three-and-a-half-bath home include walls of glass, a 70-foot-long great room, as well a large deck area surrounding the pool.

According to Gaines, it was also nearly snapped up by supermodel and serial Hamptons property investor Christie Brinkley.

“When I bought this house, Christie Brinkley had just looked at it to buy for her parents,” said Gaines, who’s planning a move back to New York City after 25 years out East.