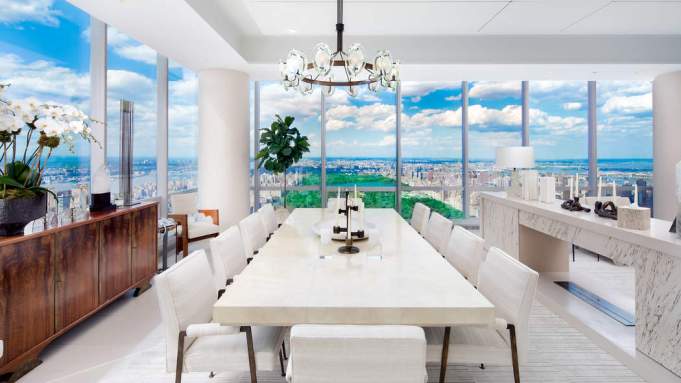 When One57, a superluxury residential tower, was erected on West 57th Street in Manhattan, it set a new bar for high-end living.

It also marked the beginning of a stream of buildings trying to outdo each other with over-the-top amenities on the same street that was soon dubbed Billionaire’s Row.

Just a few years later, some of the shine has come off the building, plagued by two foreclosures and a couple of unprofitable resales on the back of a struggling luxury market.

And it seems it is no longer in vogue for Canadian billionaire fashion investor Lawrence Stroll, who as well as his penchant for Ferraris, is also known for being one of the forces behind Michael Kors’ 2011 IPO.

He is selling an opulent apartment that takes up the entire 85th floor of the exclusive building with a price tag almost as high as the pad. Indeed, at $70 million, it’s the fifth most expensive condo for sale in Manhattan.

And while he may want out of the building, there are many that can only dream of living in this meticulously designed apartment in the sky. Since paying just over $55 million for it in 2014, Stroll has fully renovated the 6,240-square-foot apartment and it seems that no detail has been overlooked.

Features include an entrance hall upholstered in woven suede, a double-sided fireplace and a three-tone sculpted ceramic wall by the artist Peter Lane in the main living area.

The views aren’t bad either, with 360-degree vistas of the entire Manhattan skyline, Central Park, the East and Hudson Rivers, Statue of Liberty and beyond.

Stroll isn’t the only fashion investor in the building: Silas Chou, his business partner who was also behind the Kors IPO, has an apartment on the 82nd floor that set him back $56.1 million.

The listing agent is Nikki Field of Sotheby’s International Realty.