Just be careful not to spill any red wine in his white-on-white Montclair home. 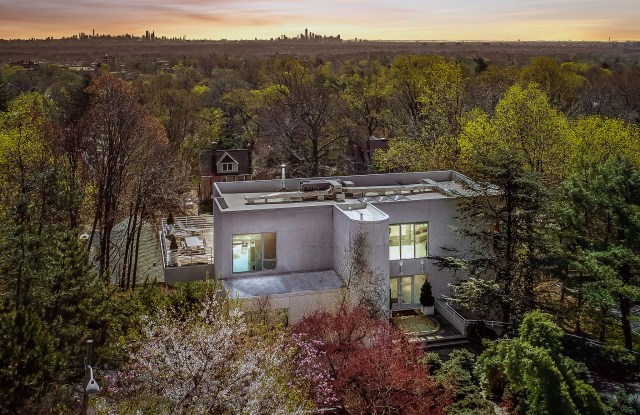 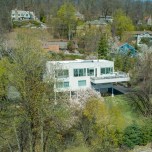 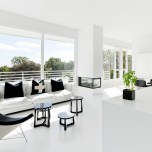 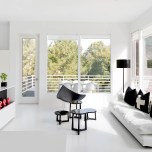 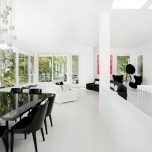 “I spent so much time looking at color that I needed a place that when I walked in I was cleansed,” John Vizzone, the former longtime creative director for Ralph Lauren’s Purple Label, says of his white-on-white modernist Montclair, N.J., manse.

The house — his fourth in the star-filled Jersey suburb (Stephen Colbert and Bobbi Brown also have homes there) — is a reflection of the designer and his wife Sandy’s minimalist and contemporary style when they bought it around a decade ago for $1.5 million and contrasts with an English Tudor with black-painted interiors they previously owned.

It took a grueling two-year-long, top-to-bottom renovation to spruce up the four-bedroom property to the couple’s liking, including installing a new roof and raising door and window heights to make the space feel like a gallery — something they have done in all their homes.

Of course, the fashion designer, who spent a quarter century at Ralph Lauren and has gone on to launch his own line of suits at Barneys New York as well as being the creative director at Cifonelli, masterminded everything himself, even designing all the furniture. “Everything is designer. It’s the top top top of what there is,” he said.

The redesign centered around showcasing the views of New York City that the house boasts because of its hilltop location.

For that reason, it was given an upside-down structure with all bedrooms downstairs so that guests could enjoy the views through floor-to-ceiling windows in the bright and airy upstairs living room, as well as from a sprawling balcony off the kitchen that has been designed to feel like a treehouse.

Here, the Vizzones hosted “tons” of parties over the years. As well as views of the Empire State Building and the Freedom Tower, guests making a stop at the restroom were greeted by the sight of a painting of a winking woman hanging above the toilet.

“A friend of mine, Brian Chan, who is an artist and photographer, showed me this photograph and I thought, wouldn’t this be funny if someone’s winking at you when you go to the bathroom,” said Vizzone. “So I put it there and everybody gets a kick out of it.”

The parties, however, brought to light the main problem with a white house — keeping it dazzling bright. “It’s a full-time job. Impossible. Literally all you do is clean. And we had a cleaning lady three times a week and the next morning you’re like, ‘did anyone clean in here?’” jokes Vizzone.

It also made him and his wife ban red wine at their parties at first to prevent any potentially disastrous spillages until they decided that was “weird” and once again allowed dark beverages.

But now it’s time for someone else to worry about the cleaning as after more than 10 years the Vizzones are relocating to the beach and have just put the four-bedroom property on the market for $2.2 million. He’s also willing to part with some of his artwork and furniture if the price is right.

“You know what’s funny: I’m a salesman,” says Vizzone. “I’ll sell anything. Everything is for sale if you want to pay the price. If someone wanted something they could have it exactly as it is and we would walk away and start over.”

The listing agent is Jody Gilardi of Halstead.