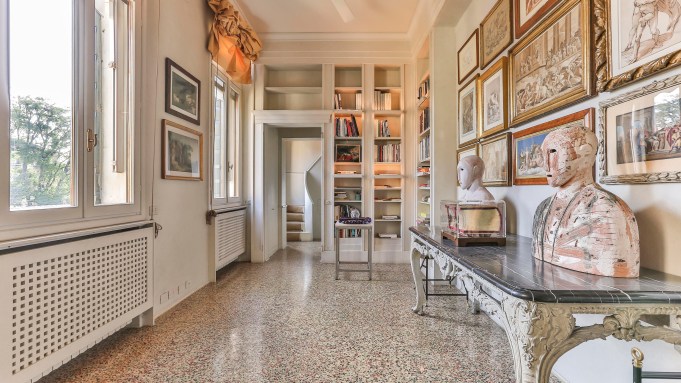 The fashion industry earlier this month mourned the loss of French designer Hubert de Givenchy, who died at age 91. While his namesake fashion house lives on, a Venetian palazzo that has just hit the rental market for a pricey 5,000 euros a week also gives a glimpse into his lifelong passion for interior design.

The home in question is a grand two-story apartment in a classic Venetian palazzo, nestled between the Peggy Guggenheim Collection and the Church of the Salute in the city’s Dorsoduro quarter.

The story goes that Givenchy, who made his name by dressing his longtime muse Audrey Hepburn, acquired it during the Eighties from his good friend, Italian politician, businesswoman and writer Susanna “Suni” Agnelli.

The automobile heiress had already done much work on the apartment to restore it to its 16th-century grandeur before Givenchy added some of his personal touches, including a duo of marble bathrooms and a library. He also adorned the walls with a plethora of brightly colored handmade fabrics.

Today many features of the apartment are unchanged from the designer’s time, because of its current owner, Vhernier jewelry president Carlo Traglio, who bought it from Givenchy in 2004.

Indeed, Givenchy’s blue wallpaper still takes center stage in one of the guest rooms, while the main living room is covered in hand-painted floral fabrics he imported from France, according to Grazia Italia.

The white-on-white kitchen, meanwhile, has been little changed from Agnelli’s time, which still now seems modern with its motorized tables that lift up and down with the help of Fiat pantographs. After all, her grandfather founded the famous Italian car company.

Traglio has made a few changes, however, including restoring the two marble bathrooms and building a sprawling wooden terrace with 360-degree views over Venice. There’s also a picturesque large shared garden.

The listing agents for the Venice apartment are Savills and Venice Estates.