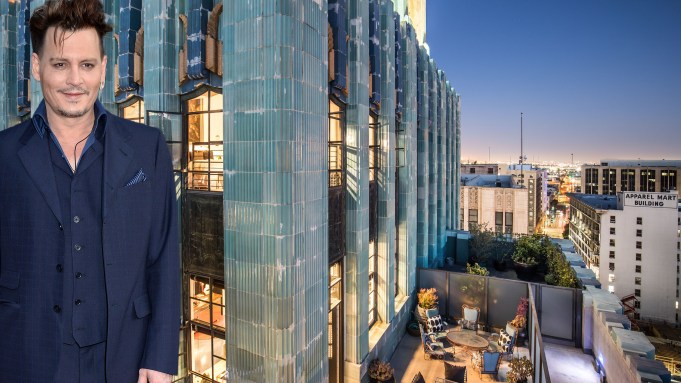 At one point Johnny Depp owned not one but five penthouses with a total of nine bedrooms and 14 bathrooms at an Art Deco luxury building in downtown Los Angeles. After all, would you expect anything less from a Hollywood superstar who’s been working constantly since the Eighties?

The “Pirates of the Caribbean” and “Mortdecai” actor and real estate investor, who just went through a nasty divorce with ex-wife Amber Heard, put them all on the market in September last year and two have since sold.

Now new images of his top-floor corner duplex penthouse at the historical landmarked Art Deco Eastern Columbia Lofts building that is still on the market for close to $2.5 million have just been released.

Features include light fixtures hanging over the first level that are original 1958 Hollywood Boulevard Walk of Fame street lights that Depp acquired and installed, while some of the artwork featured is from his collection, too, including the piece over the master suite bed.

Elsewhere, there are vintage signs, cheetah chairs and a half-naked painting of Depp, although these particular features — like most of the furniture — have been added after he decided to sell as it is understood that this particular penthouse was used as an art studio so was barely furnished.

Depp used one other as a guest suite and added doorways to the other three, turning them into a big private living space for himself. According to various reports, he bought the five penthouses in 2007 and 2008 for around $7.2 million.

Sadly for potential buyers, the street lights, artwork and furniture aren’t part of the sale of the two-bedroom, three-bathroom penthouse. Perhaps he will take them with him to his next project — whatever that may be.

Two other penthouses — priced at $2.38 million and $1.79 million, respectively — are still for sale, while Depp is also trying to sell his estate in Le Plan-de-la-Tour in the South of France and has cut the price from $55 million to $39 million. It’s about 10 miles outside the beachside town of Saint Tropez and was where he lived with his former partner, Vanessa Paradis, and their two children.