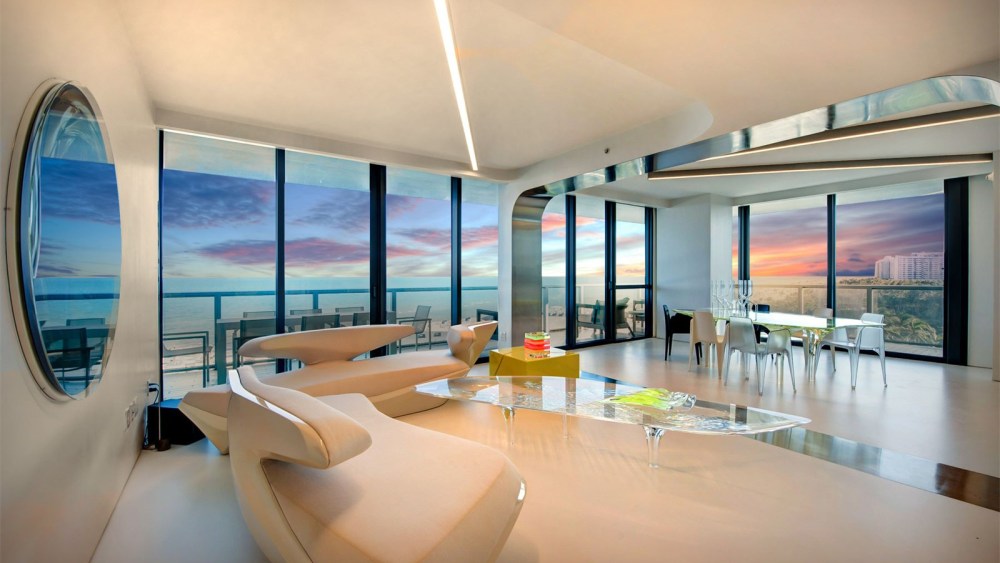 The late celebrated architect Zaha Hadid has left her mark on many cities, with her residential buildings such as 520 West 28th Street in Manhattan and One Thousand Museum in Miami continuing her legacy.

In Miami there’s another piece of architecture that will continue the Pritzker-winning architect’s legacy and that’s her unique condo at W South Beach. She bought two apartments at the luxury building for a total of $2.79 million in 2010 and combined them, before later adding a separate $1.38 million studio for her collection.

The combined two-bedroom, three-bathroom condo and adjacent studio, which together have over 2,500 square feet of living space, have just returned  to the market with a new price tag of $6.5 million, down from $10 million when it was first listed in the spring.

The giveaway that it belonged to Hadid, who died unexpectedly last year at the age of 65, are the signature curves that adorn the apartment, which feature on many of her famous projects such the luxury residential building One Thousand Museum (It’s currently under construction in the city).

Other features include metallic surfaces that reflect the light and wrap around decks with impressive views of the ocean, while a big bonus for prospective buyers is that all her art and furniture are included in the sale.

Christian Gibbon, general manager of Zaha Hadid Holdings in London, told the  Wall Street Journal that Hadid had many friends in Miami and used the property while working on the One Thousand Museum condo building.

The listing agents are Ivan Chorney and Angelica Garcia, both of One Sotheby’s International Realty.