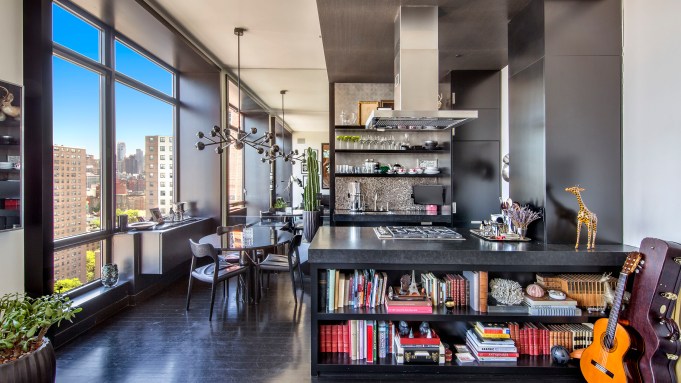 Mendel’s one-bedroom abode, which set him back $1.3 million in 2011, is the handiwork of interior designer and architect David Mann, who has also given a number of Mendel’s boutiques a makeover throughout the years.

According to the listing, held by Lance Nguyen of the Corcoran Group, Mann’s renovation involved decking out the apartment in black and white, J.Mendel’s signature colors.

The finished product is a mixture of charcoal velvet-lined walls in the foyer, baseboards and door frames sheathed in black leather, and a bedroom headboard made of camel-hued cowhide.

While the apartment is pretty small — 732 square feet to be exact — and only has two tiny closets, which one would assume would not be enough for a designer, Mendel previously told Architectural Digest that he bought it for the views.

After all, it’s located at The Caledonia, a high-rise luxury Chelsea building overlooking the High Line and boasts views of the Hudson river. There’s also a fancy rooftop from which the surrounding scenery can be enjoyed.

To deal with potential storage issues, Mendel, who became chief executive officer in 2016 following the departure of Marc Durie, purged much of his belongings in preparation for using “what must be the smallest walk-in closet in New York”, wrote Architectural Digest.

This comes after WWD reported last month that the company was facing six lawsuits, alleging various outstanding payments, the most recent being over its apparently closed headquarters, and subsequently filing for bankruptcy.