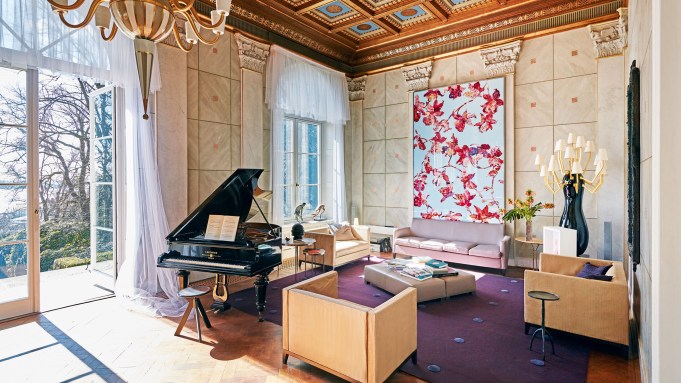 Cash-rich Karl Lagerfeld fans who’ve bought everything Chanel and Fendi might want to consider a German villa for their next purchase.

“Villa Jako,” an opulent abode in Hamburg’s exclusive Blankenese district that belonged to the iconic designer for most of the Nineties, has hit the market for 10 million euros.

The three-bedroom hilltop house was built for a shipping magnate in the Twenties to resemble a Roman villa, complete with a grand facade and, of course, multiple columns.

He named it Villa Schüler, but when Lagerfeld acquired the home in his native city, one of the first things he did was to change its name to Villa Jako — a tribute to his longtime partner Jacques de Bascher, who died in 1989.

At the same time, he hired renowned Hamburg-based art conservator Renate Kant to help him refurbish it and must have been pretty pleased with the results as he went on to shoot the advertising campaign for his Jako perfume in the gardens.

In fact, Chanel’s creative director was so inspired by the villa that he published a book on its interiors and gardens called “Ein Deutsches Haus.”

Nevertheless, Lagerfeld eventually sold the Hamburg property in 1998, but the owner has preserved some of his interior design elements, according to the listing broker, Engel & Völkers.

Features include a grand living room that spans the entire length of the property, gold leaf-painted ceilings, a library and round-arched glass doorways that open directly onto the garden and terrace where unobstructed views of the River Elbe can be enjoyed.

Lagerfeld is known for his love of interior design and has worked on multiple lavish homes around the world that he’s owned, including a mansion in Monaco, a chateau in Brittany and a house in Vermont, among many others.

Most recently, he has turned his passion into a business, after being hired to design a lobby in the Estates at Acqualina — twin, 50-story luxury residential towers in Miami that come complete with an ice rink and traders’ room where apartments cost between $4 million and $9 million.