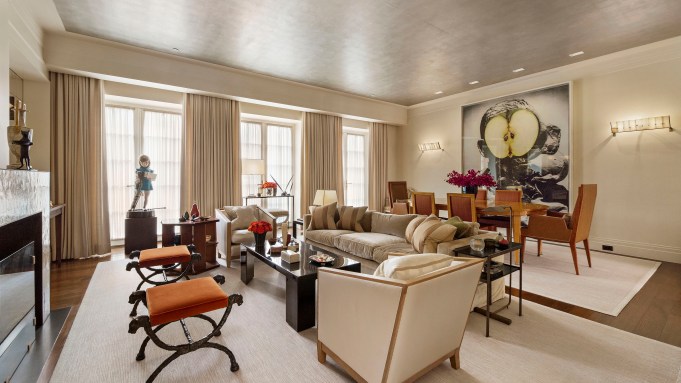 Fresh from buying an architectural gem in a leafy New York suburb and marrying his longtime partner, Marc Jacobs has just made another big life change — listing his grand Manhattan town house for sale.

After close to a decade of calling it home, the designer put his multistory, three-bedroom West Village abode on the market today, with an asking price just shy of $16 million.

As first reported by WWD, Jacobs and his new husband, Char DeFrancesco, plan to spend much of their time in their newly purchased Frank Lloyd Wright-designed house in Rye, in Westchester County, N.Y., and no longer need something so big in the city. Instead, the couple are on the lookout for a smaller pied-à-terre in Manhattan.

“I’m 55 years old, I’m getting married,” Jacobs told WWD in February. “This feels like really a new chapter. I’d like to live a life outside. I just sit home and watch TV in the five-floor town house, you know? It’s like, I’d like to be doing that with a beautiful view with dogs running around in the yard.”

While he described his new house, his first outside of New York City, as “magnificent,” the one he’s leaving behind is also pretty spectacular, thanks to a no doubt costly renovation he undertook after paying almost $10.5 million for it in 2009.

At the time, he asked the developer to deliver the never-lived-in-before house as a blank canvas so he could put his own mark on all its spaces. “Everything in the house was his vision,” said listing broker Chris Poore of Sotheby’s International Realty.

The results include an oak-paneled living room that opens out to a garden through a wall of glass doors, a study and a dining room, all filled with Jacobs’ impressive collection of art.

Elsewhere, there’s a full-floor master-suite with paneled art walls, a mahogany dressing room and closet with H. Theophile hardware, and a bathroom finished in Emperador Light marble. Two more bedroom suites are located on the fourth floor, while all floors are connected by an elevator.

There’s also a lot of outdoor space for Manhattan, including a secluded garden courtyard surrounded by tall trees and ivy and a rooftop terrace with a trellis-topped dining area, plenty of room for alfresco lounging and entertaining.

It’s located in the tony Superior Ink condominium where residents can enjoy an array of luxe amenities such as a gym, yoga and screening rooms, as well as a lounge with a catering kitchen.