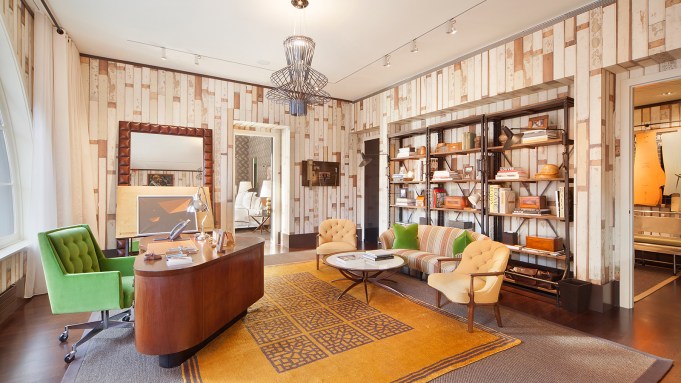 WWD suspected that J. Crew boss Millard “Mickey” Drexler might be suffering from seller’s fatigue when on April 22 he pulled one of his Manhattan homes from the market after struggling to find a buyer for two years despite a $15 million price cut.

This was the second home in the city that he removed the “for sale” sign for this year against a backdrop of Manhattan’s weakening luxury property sector where a flood of high-end condos coming to market has meant that many sellers have found it difficult to get buyers to open their wallets.

It appears that he had a quick change of heart as just over one hour after WWD inquired on Tuesday about why he had taken his fancy TriBeCa loft apartment off the market, it was placed back for sale at exactly the same price of $19.95 million.

Drexler paid $14.3 million for the 6,226-square-foot spread in 2012 through an LLC, whose address is listed as J. Crew’s headquarters in New York, according to PropertyShark’s records, and first listed it for sale for $35 million in April 2015. In between then and today, it has been on and off the market several times, seen numerous price cuts, as well as a change of brokers.

The five-bedroom apartment is housed in a 12-unit Franklin Street condominium, which has a 24-hour doorman and is down the block from the pad Taylor Swift calls home when she’s in town. Since buying it, he has certainly put his own touch on it, hiring renowned French architect Thierry Despont to do the interiors.

Inside, there is a billiards room, arched windows, original columns and industrial doors, an open stainless-steel kitchen with a breakfast bar, brightly colored living spaces and a gallery hall complete with dress forms.

Drexler was also trying to sell a nearby town house in TriBeCa, which he listed for just under $30 million in May 2016, but that also disappeared from the market in January after a price cut to $27.5 million failed to work its magic.

Interiors of the town house, which started life as a coffee roasting plant, were also by Despont — as was Drexler’s Hamptons mansion, which he sold in 2016 to billionaire financier Adam Lindemann for $48.7 million.

Property records showed that Drexler paid $27.5 million for that house in 2007. It was once owned by Andy Warhol, whose guests included Jackie Onassis, Mick Jagger, Elizabeth Taylor and John Lennon.

A spokeswoman for J. Crew and the listing agents for both homes, Jim St. Andre and Shaun Osher of CORE, declined to comment.