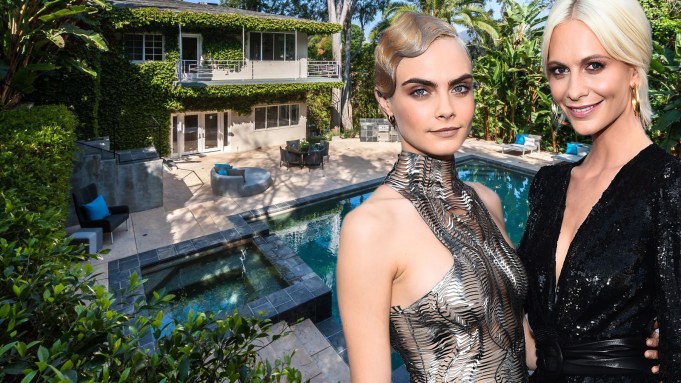 British model sisters Cara and Poppy Delevingne, who are both trying to carve out acting careers in Hollywood, have been revealed as the mystery buyers of Oscar-winning actor Jared Leto’s Los Angeles home.

The sisters are reportedly behind an LLC that paid just over $2 million for the vine-covered Hollywood Hills home, for which “Dallas Buyers Club” star Leto paid $1.6 million in 2006.

Cara and Leto, who is also the frontman of band Thirty Seconds to Mars, starred alongside each other in “Suicide Squad,” so perhaps he told her about the four-bedroom, three-bathroom spread.

Hidden behind a quiet facade, the Fifties boxy two-story home boasts more than 4,000 square feet of living space, including a recording studio. This might have attracted “Valerian and the City of a Thousand Planets” actress Cara to the property, as she has also tried her hand at singing.

Elsewhere in the home there is a large light and airy white-walled living room, an office and a master suite with a balcony overlooking the pool area, according to the listing.

But perhaps the biggest selling points of the fairly low-key home are the multiple outdoor spaces with a lagoon-style pool and Jacuzzi surrounded by an expansive patio and tall trees (no doubt to ensure the A-lister’s privacy).

There is also a built-in barbecue, a fire pit, grassy lawn and a separate outdoor living room for entertaining guests, which will no doubt be used by the sisters, who are both known for their love of partying.

Reps for both sisters did not respond to requests for comment.