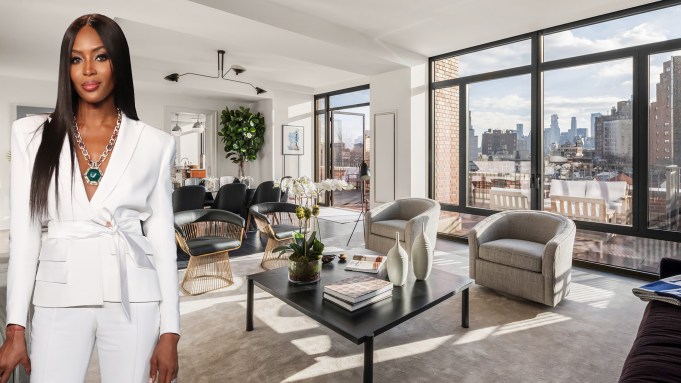 While TriBeCa condominium 443 Greenwich Street has attracted a plethora of A-list actors, a West Village complex has been just as popular among the fashion pack.

Now, another member of fashion royalty might be joining their ranks as the New York Post reported that British supermodel Naomi Campbell recently toured a plush penthouse at the exclusive development.

The 47-year-old has yet to put an offer in on the sprawling $18 million penthouse, but if she does, she will be the owner of a quintessential glamorous New York abode.

Completed in 2014, it comes with five bedrooms, a media room, floor-to-ceiling windows and a large terrace, while the plush master suite boasts south-facing windows, a substantial walk-in closet, and a windowed en-suite spa bath clad in white and gray marble.

As well as members of New York’s fashion set, other notable Greenwich Lane homeowners include “Dexter” actor Michael C. Hall and Starbucks chief executive officer Howard Schultz. (The latter paid $40 million for his swanky pad.) It has also drawn in Jon Bon Jovi, who recently spent $19 million on a luxury condo at the complex.

If Campbell opts to move in, perhaps she’ll bump into the complex’s other famous residents while using some of its state of the art amenities. These include yoga and treatment rooms, a 25-meter swimming pool with hot tub, a golf simulator, residents’ lounge, dining room with guest chef’s kitchen and a 21-seat screening room.

The listing broker for the penthouse is Douglas Elliman’s Patricia Vance. A rep for Campbell declined to comment.