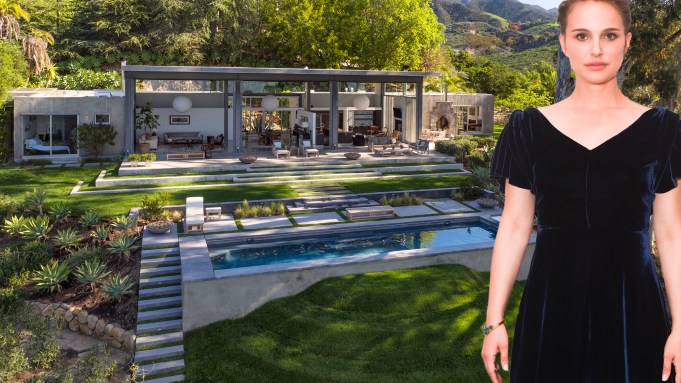 Natalie Portman’s return to the U.S. after two years of living in Paris looks set to be permanent as the “Jackie” actress has reportedly just paid $6.5 million for another California home.

The 35-year-old mother-of-two and face of Miss Dior perfume bought a modern Barton Myers-designed house in the foothills above the affluent seaside town of Montecito in Santa Barbara, according to Trulia.

Portman, whose directoral debut “A Tale of Love and Darkness” was released last year, also scored herself a discount as listing records showed that the 3,991-square-foot home was originally listed for sale for just under $7 million.

Set on over 10 acres of land and made out of steel, glass and concrete, the private pavilion-style home has dramatic design elements that put the sweeping ocean views at the center of attention.

Perhaps the most unusual feature of her new four-bedroom, five-bathroom property are three large glass-paned garage doors that lift at the press of a button to turn the living area into an open-plan porch-like space.

Elsewhere there is a library/office, a number of indoor fireplaces, beautiful gardens and a brand new swimming pool, the listing showed.

Portman isn’t the only owner that has had links to the entertainment world. The seller was Emmy-winning documentary filmmaker Peter Jones, while between the Thirties and Fifties the original house on the site belonged to Leopold Stokowski, who lived there briefly with his third wife Gloria Vanderbilt, according to various media reports.

Portman and her French husband, Benjamin Millepied, also reportedly own another house in Los Angeles’ Los Feliz neighborhood, which is set on only half an acre of land. It was reported last week that Angelina Jolie also bought a home in the same area for close to $24.5 million.

A spokeswoman for Portman and the listing agent, Kurt Rappaport of WEA homes, did not respond immediately to request for comment.