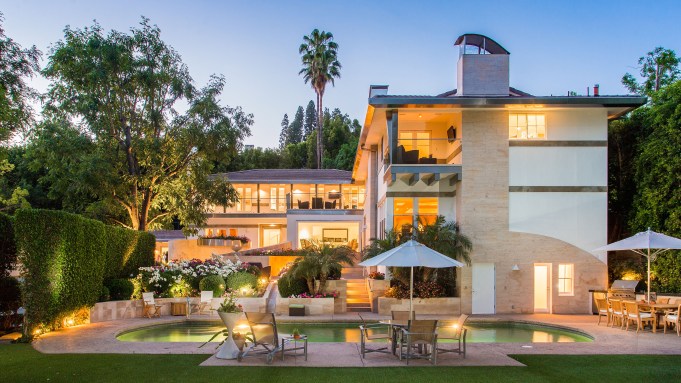 Late Hollywood super producer Jerry Weintraub’s Beverly Hills mansion, which made a cameo in one of his movies, has just returned to the market with a $5 million price chop.

His sprawling estate is now once again up for grabs for just a smidgen under $20 million, down from $25 million when the 7,600-square-foot, five-bedroom mansion first hit the market in February 2016 .

Weintraub, who died in 2015, bought the mansion in the 1970s and hosted many parties there over the years for his well-known friends and clients, including George H. W. Bush, Jimmy Stewart, Neil Diamond, Frank Sinatra, Elvis Presley and Bob Dylan.

It even featured in “Oceans 12”, which Weintraub produced as well as the other movies in that franchise and “The Karate Kid” series. He went on to win three Emmys, including one for HBO’s “Behind the Candelabra,” starring Michael Douglas and Matt Damon.

Before he started producing movies, he managed tours for the likes of Elvis, Frank Sinatra, Bob Dylan and The Carpenters, among others.

The estate itself is tucked away behind private gates and set on over an acre of land. In the main house there is a temperature-controlled wine room, staff quarters and an elevator, which leads to the second floor where the master suite is located, as well as an adjoining office and gym and French doors that open onto a private terrace.

Outside, there is a pool and spa, a fully hedged and lighted tennis court, a guest house, three-car auto gallery, and a motor court with parking for 25 cars.

This was not his only home. He also had a mansion in Palm Desert, California, to which, he told Architectural Digest in 2005, his celebrity friends were frequent visitors. That home, which has an Oceans-11-inspired bar, is up for sale for $12 million.

The listing agents for the Beverly Hills mansion are Mauricio Umansky and David Findley, both of The Agency.