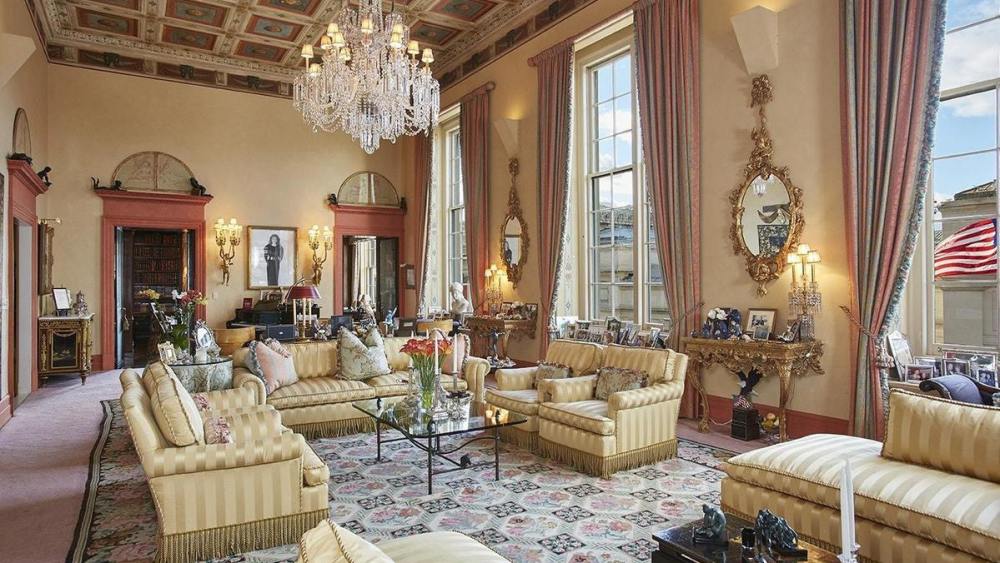 The fashion mogul’s eldest son just paid $21 million for a lavish full-floor apartment in a tony Fifth Avenue co-operative opposite The Metropolitan Museum of Art.

For 25 years, the 5,000-square-foot, three-bedroom pad has been home to socialite, philanthropist, political fundraiser and the next U.S. ambassador to Poland, Georgette Mosbacher.

Since buying it from an Italian countess in 1992, Mosbacher, who once owned high-end cosmetics company La Prairie, transformed it into an opulent entertaining space for her illustrious dinner guests — King Juan Carlos I of Spain, Tom Hanks and Bill Clinton to name just a few.

The finished product includes a sprawling grand salon complete with a huge crystal chandelier, a fresco painted ceiling and 16-foot high windows that fits up to 200 guests. There’s also a dining room that seats 18 and a formal library with a mariner’s map painted on its ceiling, where guests no doubt retired after dinner with their night caps.

The apartment was originally on the market for $29.5 million so the “Spectacular Now” producer, who declined to comment on the sale, got himself a tidy discount. That should cover the hefty $9,375 monthly maintenance fee for a while.

Lauren’s younger brother, David Lauren, has also been active in New York City’s real estate market of late. He and his wife, Lauren Bush Lauren, earlier this month found a tenant for their West Village town house that was advertised for $13,000 a month.

The ivy-covered three-story property is one of a trio of adjacent town homes the Laurens purchased off fashion photographer Annie Leibovitz in 2014. The couple, who just welcomed their second child, reportedly use the other two properties as their private abode.