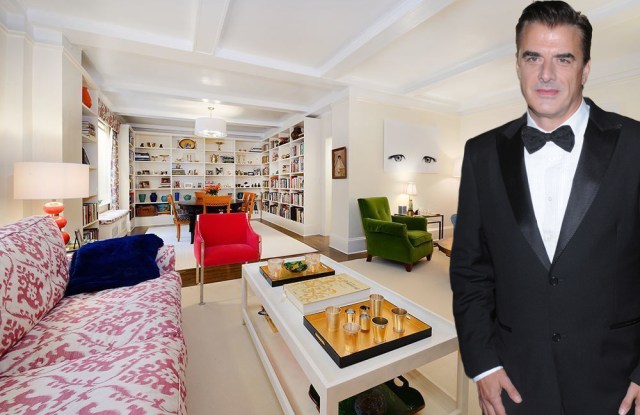 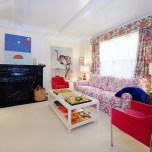 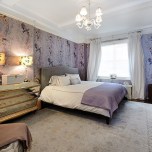 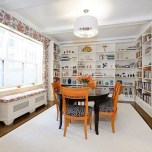 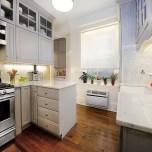 In “Sex and the City,” Chris Noth played the commitment-phobic Mr. Big, who eventually left his bachelor pad and bought Carrie Bradshaw a plush prewar Fifth Avenue penthouse close to the Metropolitan Museum of Art. But in real life Noth has gone for something much more low-key, picking up a two-bedroom co-op apartment on the Upper East Side for close to $1.9 million, according to city property records.

And Bradshaw and her friends might not approve of the interiors, which include frilly red and green floral curtains in the living room that clash with the pink-pattered sofa  next to them.

There is also a lot of colorful wallpaper in the two bedrooms that Mr. Big might have liked, considering he once painted a statement wall in his bedroom red (Bradshaw didn’t approve).

One element she might like, though, is the built-in bookshelves where she could have stored all her back issues of Vogue.

As for closet space, while there is some, she probably would have had to store clothes in the oven, like a proper New Yorker.

According to Luxury Listings, which first reported the sale, Noth, who went on to star in “The Good Wife,” also owns an apartment close to Washington Square Park.

He left lots of “Sex and the City” fans disappointed earlier this week when he made comments that suggested he might be done playing Mr. Big. “I feel like we told that story,” he told Us Weekly.”I don’t think there’s anything left for me to say about that. I want to tell other stories.”

The brokers were Ileana Lopez-Balboa and Deanna Kory, both of The Corcoran Group.