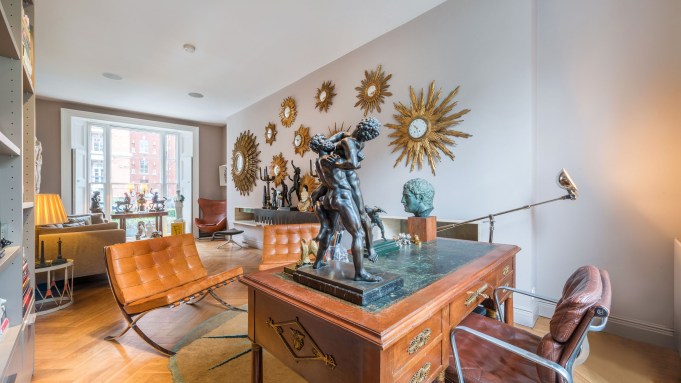 Canadian-British shoe designer Patrick Cox has sold his “selfish” bachelor pad complete with a disco loo in North London’s Little Venice neighborhood for 2.7 million pounds as he swaps the British capital for the party island of Ibiza.

The designer, whose Wannabe loafers were a hit in the Nineties and worn by the likes of Elton John, Madonna and David Beckham, made some unusual renovations not long after he bought the four-story semi-detached Victorian house around 15 years ago.

While most people would want more bedrooms, he halved the number from four to just two, leading his architect to joke that he was “selfish.” But he told him that he was a single man and didn’t want a “bunch of Canadians coming to stay in the house all the time.”

The result is that there is one large bedroom per floor and a lot more space for his dressing room where he stores his impressive collection of around 400 pairs of shoes. After all, would you expect any less of a shoe designer?

Listing images show that the house is somewhat of a party pad with a mirrored disco bathroom complete with a full sound system and large marble-lined entertaining spaces on the lower ground floor, which opens out to a large garden — something of a rarity in this part of the city.

The design of the interiors appears to be heavily influenced by the Roman Empire, with busts, small statues and stone carved paintings filling the house.

“For 15 years the villa in Little Venice has been home for myself and the dogs. I will really miss the house and Little Venice, but I am looking forward to taking on another ‘Grand Designs’ style project in Ibiza,” said Cox, who made a comeback to the shoe world in 2015 with his new label Lathbridge.

The listing agent was Aston Chase.