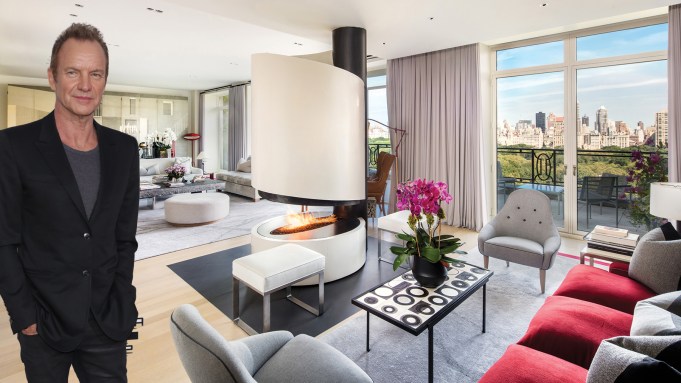 Sting and his wife Trudie Styler have just put their opulent Manhattan penthouse on the market for a whopping $56 million.

In fact, the latter is thought to be the mystery seller behind a $59 million penthouse that is also up for sale in the building, which was completed by William and Arthur Zeckendorf in 2008 and helped start the trend for ultraluxurious condominiums with super amenities.

But back to the penthouse in question. Property records show that the former Police frontman and Styler were among the first buyers at 15 Central Park West, dropping $27 million on the penthouse in 2008.

According to the listing, their home was designed by Lee F. Mindel, who added two custom sculptural spiral staircases to the 5,417-square-foot pad, which boasts a sprawling 400-square-foot terrace overlooking Central Park.

Inside, there are three bedrooms and a home office, which could be converted into a fourth bedroom, but the master suite has to be one of the showstoppers of the penthouse. After all, there can’t be that many master suites in Manhattan with incredible views of Central Park from both the bed and the bath.

Elsewhere, there is a unique open gas fireplace in the living room, a chef’s catering kitchen with three Miele dishwashers (clearly one just isn’t enough) and a library with built-in bookshelves.

The building’s residents also have access to a range of amenities including a private restaurant, a fitness center, a 75-foot-tall skylit lap pool, wine rooms and a playroom.

The property is represented by Corcoran’s Deborah Kern and Sotheby’s Suzun J Bennet. A spokesperson for Sting did not respond immediately to request for comment.