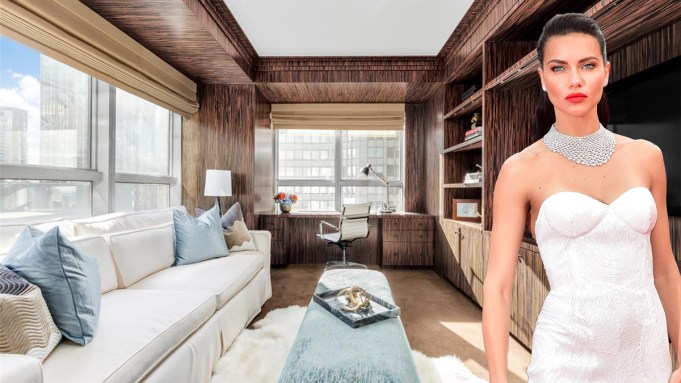 It appears that Brazilian model and Victoria’s Secret veteran Adriana Lima has become the latest victim of the slowdown in Manhattan’s luxury homes market.

After struggling to offload her plush apartment near Central Park against a backdrop of weakening demand for expensive homes and a flood of new condos hitting the market, Lima has wiped more than $1 million off the asking price, pushing it down to $4.3 million.

Records show that the 35-year-old paid just under $2 million for the apartment in 2003 and first put it up for sale about three-and-a half years ago for $5.5 million. It was relisted in December for $4.85 million, only for the price to be cut again today.

In December, her ex-husband, former NBA player Marko Jarić, who now jointly owns the apartment with her, told The Wall Street Journal that he and Lima moved to Miami several years ago and the apartment is now used as a pied-à-terre when they are in New York.

He said they decided to sell the 2,200-square-foot, two-bedroom condo, which is in the Metropolitan Tower on West 57th Street, because they no longer use it as much.

According to the listing, she has fully renovated the apartment, which boasts views of both the park and the city through floor-to-ceiling glass.

The Metropolitan is a white glove, full-service condominium in which amenities include a 24-hour doorman, concierge, fitness center with pool and a residents-only restaurant.

A spokesperson for Lima did not respond immediately to request for comment.

Why Have These Famous Fashionistas’ Homes Languished on the Market?