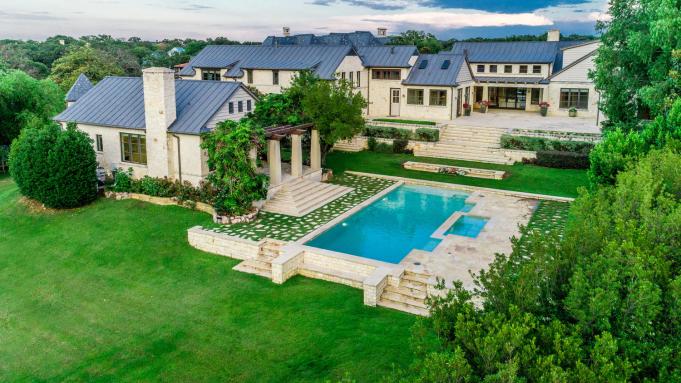 An Austrian crystal heiress’ sprawling Texas mansion is about to hit the auction block after she failed to find a buyer through more traditional routes.

Vanessa Swarovski, whose great-great grandfather Daniel Swarovski was the founder of the namesake brand, is auctioning her opulent six-bedroom, nine-bathroom estate in the upmarket gated Vaquero community in Westlake, Tex. on June 30 through Elite Auctions. It was last on the market in February, asking $3.7 million.

The highest bidder will get their hands on a grand stone house with a wrap-around circular driveway, a gourmet kitchen, a formal dining room, as well as a first-floor master-suite complete with a relaxation room. Records showed that Swarovski, who was previously married to baseball player Jorge Piedra, has owned it since 2012.

Other features include a deck with unobstructed views of the Vaquero Club Golf Course, a terraced backyard and a stone staircase that descends to the home’s in-ground swimming pool, spa and adjacent one-bedroom guest house. There are also subtle nods to her family background such as a chandelier in the bathroom.

The new owner will also be able to count golf pro Brian Watts, baseball player Josh Hamilton and even The Jonas Brothers among their new neighbors as they all own nearby properties, according to Elite Auctions.

The latter helped the group branch out of the crystal swans market that adorn many mantlepieces and into the fashion world, collaborating with the likes of the late Alexander McQueen and supplying the crystals for the risqué dress Rihanna wore to the Council of Fashion Designers of America awards in 2014.

According to various media reports, the sisters grew up in Austria, but their mother is from Texas, which would explain the elder sister having a home there.