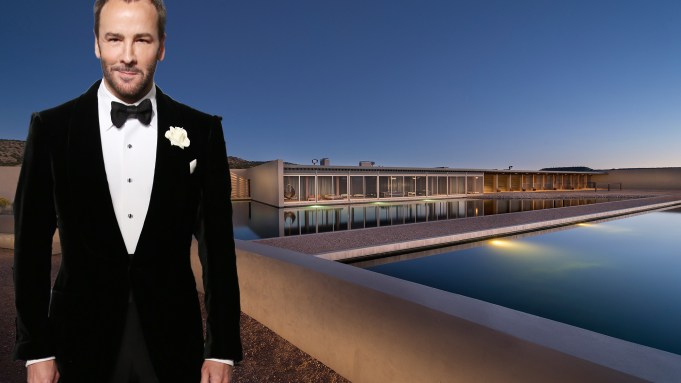 Tom Ford is synonymous with beautiful things and his Santa Fe, N.M., ranch, which dwarfs Manhattan in size, is no exception.

Cerro Pelon Ranch, which has been on the market for $75 million since last summer and is set on more than 20,000 acres in the Galisteo Basin, boasts breathtaking views, equestrian facilities as well as an air strip and airplane hangar.

If that’s not enough, then there’s an old Western movie town, which has been used for the setting of “Cowboys and Aliens,” “Thor,” “All the Pretty Horses” and “Wild, Wild West.” It’s called Silverado Movie Town after the movie it was originally built as a set for.

The main residence, designed by Japanese architect Tadao Ando, who’s famous for the Church of Light in Osaka, floats on a reflecting pool and is adjoined by a state of the art horse barn with eight stalls, according to the listing.

The fashion designer and film director previously told GQ Australia that New Mexico had “always been a very spiritual place for me, even before I realized I was particularly spiritual.”

Ford, who released his second movie “Nocturnal Animals,” starring Jake Gyllenhaal and Amy Adams last year, also paid $38.75 million for the Holmby Hills estate of the late American socialite and philanthropist Betsy Bloomingdale in December. He even scored himself a respectable discount from the reported $55 million price tag.

Kevin Bobolsky, the listing agent, and a spokesman for Ford did not respond to request for comment.