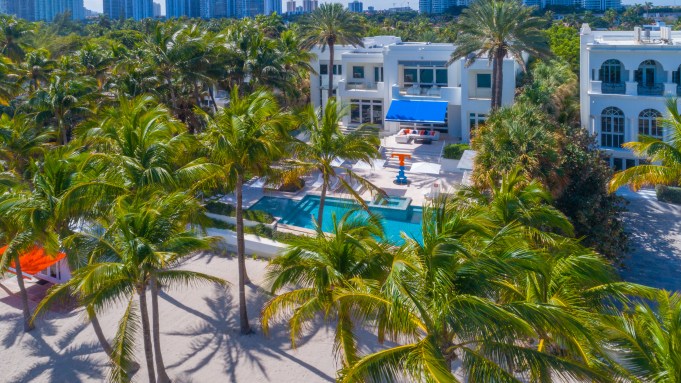 Tommy Hilfiger’s “scratch and sniff” Miami manse just got another markdown, but you still need to be a multimillionaire to buy it.

The colorful Pop Art-themed Golden Beach abode is now on sale for $23.5 million and while it’s certainly not a bargain, it’s still a better deal than the $27.5 million price tag the house had when it hit the market a year ago (it got another price cut in between).

Hilfiger and his wife, Dee Ocleppo Hilfiger, paid a little over $17 million for the seven-bedroom oceanfront spread in 2013 and have put their own stamp — and smell on it — with the help of famed interior designer Martyn Lawrence Bullard.

Indeed, the results can be described as a work of art, with many of the rooms in the modern structure decorated in vibrant candy colors, such as a psychedelic red movie theater and Pop Art-style bedrooms, solidifying the Sixties/Seventies disco theme.

Hilfiger’s office, meanwhile, has been decked out in the namesake retailer’s recognizable blue, red and white colors, while his vast and impressive art collection, including pieces by Andy Warhol, Keith Haring and Jean-Michel Basquiat, is displayed throughout the house (but of course, not included in the sale).

And it’s not just the vibrant colors that hit the senses, as several guest bathrooms even feature scratch-and-sniff fruit-flavored wallpaper.

“I told Martyn, ‘If it’s not shagadelic or groovy, it’s not coming into the house,'” Dee Ocleppo Hilfiger told Architectural Digest when their house appeared on the magazine’s cover a few years ago.

Other quirky features include a 23-foot custom chandelier, a bar complete with a vintage style disco ball all the way from Monaco, a monochrome kitchen, a car that has been turned into a snooker table and a Mickey Mouse statue.

The outside is pretty impressive, too, with an infinity pool and spa — surrounded by palm trees, patios and an eye-catching blue and orange Keith Haring sculpture.

Hilfiger is selling after upgrading to a $34 million sprawling Palm Beach mansion. His new Florida home boasts five bedrooms and over 200 feet of ocean frontage, double the amount of his Golden Beach house.

The listing agents for the Golden Beach house are Jill Hertzberg and Jill Eber of the Jills team at Coldwell Banker Residential Real Estate.