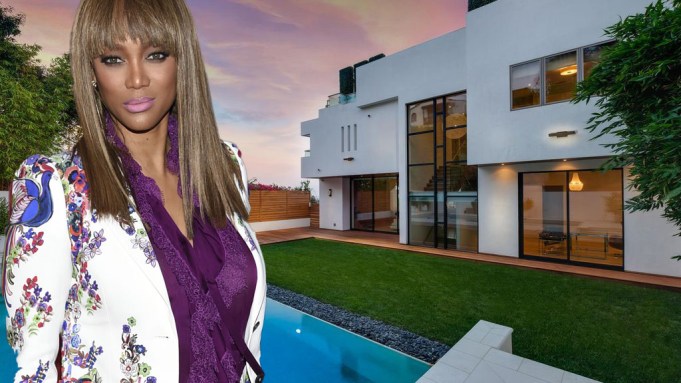 “America’s Next Top Model” creator and host began her Pacific Palisades spending spree in 2014 when she purchased a $3.2 million abode, later adding a $7.3 million home and a $1.4 million investment property to her collection.

Now the mother of one has struck again, buying her fourth property in the celebrity-packed neighborhood for close to $7 million through a private trust with her mother listed as the primary contact.

Her latest purchase is a five-bedroom, five-bathroom modern estate built in 2014, and while it’s unclear if it is for her personal use or another investment property, it certainly has all the requirements of a typical celebrity home.

The property is filled with state-of-the-art amenities, from the zero-edge pool decked in white limestone outside to a media room with a huge projection screen and full bar inside.

If that’s not enough, there’s also a custom wine cellar, gym, playroom and a rooftop terrace with an outdoor kitchen, fire pit and hot tub.

The interiors, meanwhile, have been kitted out with wide plank flooring and high ceilings throughout and marble surfaces.

While building her West Coast property portfolio, Banks was until recently also trying to  sell her condo in Manhattan’s Battery Park City for $17.5 million. It came with a hair salon and a 360-degree mirrored dressing room and boasted views of the Statue of Liberty, but was recently withdrawn from the market.

She previously said that her dinner guests enjoyed looking for Leonardo DiCaprio, who lived in the same Battery Park City condominium. Now that she’s taken down the for-sale sign, they might have a few more occasions to try and spot him.

A representative for Banks declined to comment on her latest Pacific Palisades purchase.