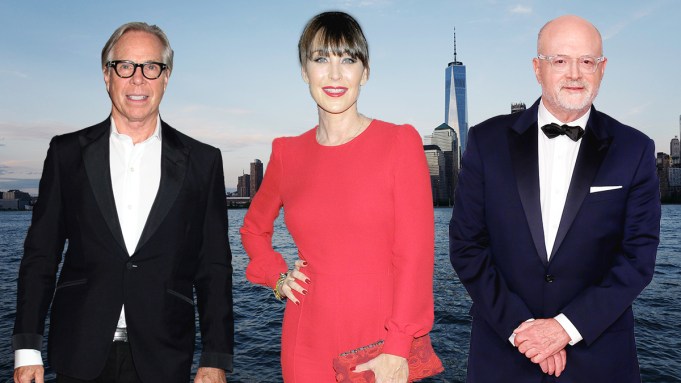 An opulent penthouse in Manhattan’s Plaza Hotel where you can eat breakfast in one of the iconic building’s domed cupolas adorned with murals of Eloise and take in Central Park from your very own terrace that looks like a life-sized chess set sounds like many people’s dream home.

But sadly for Tommy Hilfiger, this wasn’t enough of a selling point for those who could afford to buy it. As a result, he recently took his luxurious Plaza Hotel duplex off the market after close to a decade-long saga of trying to sell it, including a series of hefty price cuts from $80 million at one point to just under $59 million.

And he’s not the only fashion boss in Manhattan who is having trouble trying to sell their homes. Shoe queen Tamara Mellon, for example, had until recently been trying to offload her Upper East Side penthouse since February 2015. The cofounder of the Jimmy Choo luxury brand alongside the eponymous designer failed to find a buyer despite a near $5 million price chop to $25 million — and an impressive shoe closet, naturally — and has removed the “for sale” sign.

It’s a similar story for J. Crew chief executive officer Millard “Mickey” Drexler, who still can’t sell his TriBeCa loft — with interiors designed by Thierry Despont — despite cutting a whopping $15 million off the original $35 million asking price when it was first listed around two years ago. He was also trying to sell a nearby town house in TriBeCa, which he listed for just under $30 million in May 2016, but that also disappeared from the market in January after a price cut to $27.5 million failed to do the trick.

So what gives? Is this the latest fashion or non-fashion trend?

In Manhattan, a large part of this is simply down to a slowing luxury sector and many buyers no longer willing to pay sky-high prices, according to Tyler Whitman, an agent at real estate tech start-up TripleMint.

“While it looks like these designers and celebrities are having problems because they’re the ones that get reported, it’s actually the luxury market in general that is struggling,” he said. “What we’re finding is that listings that are worth $4 million or more in Manhattan are taking a long time to sell and it’s usually because pricing is too high at a time of weakening demand. Celebrity homes usually fall into this price category.

“Tommy Hilfiger’s penthouse specifically is a very expensive home in one of the world’s most famous buildings. The fact that it didn’t sell is just a symptom of it being in that super-luxury market, which is saturated right now.”

A flood of shiny new condos coming to market in Manhattan combined with weakening demand thanks to political and economic uncertainty has meant that sellers are having to become a lot more realistic on pricing in order to close deals.

Indeed, in a sign of a struggling market, a recent report by Miller Samuel on behalf of Douglas Elliman Real Estate found that the average number of days a luxury property (defined as the top 10 percent of sales) spent on the market in Manhattan in the first three months of 2017 was 172, up from 122 a year earlier.

Kipton Cronkite, a broker at Douglas Elliman, said: “Right now people have options in New York. New developments mean that there is the opportunity to take your time, shop around and negotiate a bit more on pricing.”

It’s not just Manhattan’s luxury housing market that appears to be running out of steam. In Miami, the average number of days a high-end condo spent on the market was 207, while the listing discount — the change from the final asking price to what the buyer actually ended up paying — hovered above 13 percent.

Against this backdrop, Calvin Klein managed to sell his Miami condo last year, but it was no easy feat: It took two years and him accepting an offer almost $3 million below the original $16 million asking price.

And over in the Hamptons, Tiffany and Co.’s new chief artistic officer Reed Krakoff is struggling to sell a sprawling mansion despite a $2 million discount to just under $52 million and the selling point that it was Jackie Kennedy Onassis’s childhood summer home.

Whitman added that while he believes struggling luxury housing markets are the main issue, there are other factors that could be affecting well-known sellers, especially in the fashion world.

“A lot of these artistic minds have very specific and over the top tastes and their apartments might not be appealing to the wider market,” he told WWD. “In many cases they’re charging a premium for the work they’ve had done to the homes, but they will need to find a very wealthy person who thinks their taste is fabulous. Eventually, someone will appreciate the work, but it could take some time and a price cut.”

And if it’s not to a buyer’s taste and they will need to renovate the property, this will remove those who want to move in somewhere straight away from the already limited ultra-rich potential buyers pool, according to Daniela Sassoun, another broker at Douglas Elliman.

“Some people will say if I’ve got to move in right away I’ve got to go with something less ‘particular.’ If they’re going to redesign, it’s going to cost a lot of money and take time — which for some people is OK and for others may be an issue,” she said.

Another factor at play is privacy. Eagle-eyed real estate and celebrity reporters are watching the sales of well-known people’s houses like hawks and will be combing through city property records to find the names of the buyers, as well as the prices paid. Many wealthy people who can afford these homes don’t want their names in the press, let alone sensitive information about where they live and how much money they spent on lavish multimillion dollar properties.

“Often they don’t like to buy it because they want to keep their privacy and if they buy it, often their name is in their records. Often you don’t go searching to buy a celebrity home,” Douglas Elliman’s Chris Leavitt, who’s based in Miami, told WWD.

Finally there’s the issue of setting up viewings at a celebrity’s house, which can often end up being a complicated vetting process.

“You wouldn’t want to show a famous person’s home to just anyone, since stars value their privacy and don’t normally want to make their business public. Anyone looking to tour a celeb home would have to go through a vetting process, so the sale of the home takes a little longer than other homes,” Redfin real estate agent Alec Traub said in a recent report.

But maybe these celebrities will have to start being less fussy about who can come and tour their homes amid a struggling market — that is they want to find a buyer.