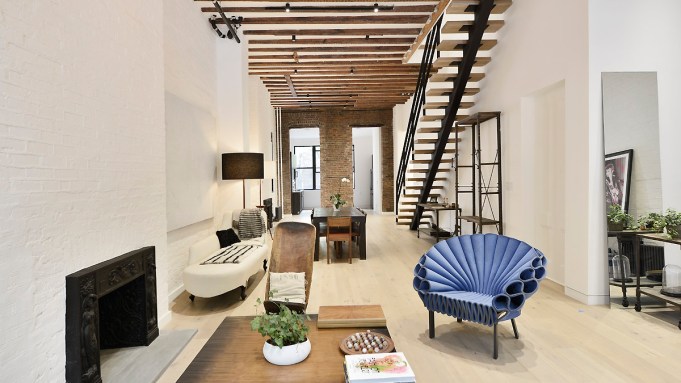 “For me less is always more,” fashion designer Yigal Azrouël told WWD over the phone from Los Angeles.

It may be a fashion cliché, but that mantra yielded chic minimalist design results when it came to the renovation of his duplex, set in an enviable Greek Revival townhouse in Manhattan’s Greenwich Village, that he just listed for close to $6 million.

For the redesign, he turned to product and interior designer Dror Benshetrit — someone he has collaborated with on multiple business projects, including his first boutique in the Meatpacking District and an interactive art installation for his 2009 men’s show.

The remit for the much more personal commission was to spin a modern twist on the 200-year-old property, while remaining true to its historic roots, although the duo didn’t know exactly what they were going to do until they demolished the whole interior space to give them a blank canvas to work from.

That blank canvas, it turned out, inspired the aforementioned “less is more” look, with the final product feeling more like a SoHo loft than a Greenwich Village townhouse thanks to beamed high ceilings, wide hardwood floors, flashes of brick and large windows, allowing natural light to flood the apartment.

A custom steel-framed floating staircase, completely redesigned using Californian-sourced wood and taking center stage in the living room, has to be the stand-out feature inside, although a Benshetrit-designed dark blue peacock chair, identical to one that appeared in a Rihanna music video, gives it a run for its money and certainly catches the eye when set against the minimalist backdrop.

The pièce de résistance of the four-bedroom, 3,000-square-foot property, however, has to be a sprawling private deck complete, with its own hammock and nestled in the treetops.

“It’s amazing what we did outdoors. For me, it doesn’t even feel like a townhouse. It feels like being in Provence or somewhere with a lot of nature,” said Azrouël. “You’re right on the park. It’s an amazing location and I can’t ask for more.”

But while he may not be able to ask for more in terms of this property, his first home renovation endeavor has given him a taste for it and he is ready to sink his teeth into a new challenge. Alas, he has decided to sell up and the duplex is listed with broker Robert Dankner, president of Prime Manhattan Residential.

“I want to build another home and I have an opportunity to do something so I decided why not. It’s something that I like to do and I feel like I’m good at it. I enjoy the process,” concluded Azrouël.