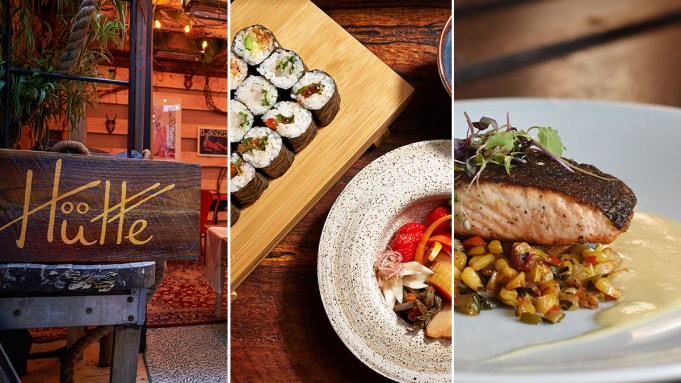 It’s been a challenging year for New York’s restaurant industry. While outdoor dining has mostly become a vestige of warmer weather — and indoor dining has once again been paused — there’s no shortage of new restaurants to check out throughout the city. Many have also prioritized offering thoughtful takeout and delivery options.

Here’s a highlight of 20 New York restaurants that opened their doors in 2020.

Mark’s Off Madison
After 30-plus plus years of cooking in his native New York, Mark Strausman opened Mark’s Off Madison — M.O.M. — as a venue to showcase the culinary highlights from his restaurant career. Strausman was most recently stationed further uptown on Madison Avenue as the chef for Fred’s at Barneys, but is no stranger to the NoMad area, having opened his first solo restaurant Campagna in the Nineties. The new venture, located across the street from Madison Square Park, combines an all-day restaurant with an in-house bakery serving 10 varieties of his Straussie’s bagels. The menu includes familiar dishes for the Fred’s devotees — all the salads are there, including the beloved O.G. Madison Salad with tuna and diced vegetables — as well as his Estelle’s chicken soup and Belgian fries twice cooked in peanut oil.

Pekarna New York
Pekarna is a 6,500-square-foot restaurant and entertainment complex located on the Upper West Side — a difficult concept to open in 2020, but one that is optimistic for the future. The massive space includes two floors, event spaces (opening next year), and four private banquet rooms. The menu is Slovenian-American, and the idea for Perkana stems from several projects, including The Opera Bar and The Versace Apartment, that owner Dean O’Neill worked on in Slovenia’s capital in the 2000s. The kitchen is lead by executive chef Kamal Hoyte and Slovenian pastry chef (and MasterChef Slovenia judge) Alma Rekić, and the cocktail program includes a selection of four absinthes served by traditional drip.

Vestry
Michelin-starred chef Shaun Hergatt unveiled his latest restaurant downtown on Oct. 2. Vestry, a casual restaurant within the Dominick Hotel, taps into the chef’s fine-dining pedigree while emphasizing accessibility and community. While many of Hergatt’s other restaurants have veered toward high-end and fine dining, he conceived Vestry with approachability in mind; he wants the restaurant to be the sort of place that diners can return to on a weekly basis. The succinct menu taps into Hergatt’s refined take on cuisine. The 20 dishes are organized by size — bites, small plates, large plates — with a few dessert options. The cuisine is American based with Japanese influences, whether in the form of a shiitake handroll, shigoku oysters or wagyu beef. Dishes are fish-driven, accompanied by local vegetables and ingredients presented with minimal manipulation so as to let the natural colors, texture and flavor shine through.

Hütte
The owner of German meat shop Schaller and Weber is bringing the Swiss Alps to the Upper East Side. The tented backyard eatery is located behind Schaller’s Stube Sausage Bar, and decked out with atmospheric elements like wooden farmhouse tables, string lights and blankets. The menu veers Austrian and German, and meat is a focus, with hearty fare like venison goulash on the menu.

Forsythia
The focus of Forsythia is Roman-style cuisine, and pasta, created in-house daily. Siwak, who ran a pop-up in New York with Maxwell last year and spent most of 2018 cooking in at Santo Palato in Rome, brings his own interpretation of classic dishes to the Lower East Side. The team also includes sous chef Mark Coleman and baker Brian Maxwell.

Rosella
Chef-owners Yoni Lang and Jeff Miller are continuing their commitment to sustainable sushi with their new restaurant in the East Village. Reducing their carbon footprint by cutting food waste and sourcing ingredients domestically is the focus at Rosella. The menu includes chirashi and other rice bowl options, sushi rolls, cold dishes like scallop crudo and tautog ceviche, soups and a chef’s choice five-piece nigiri.

The Tyger
The Chinese Tuxedo Team opened their latest restaurant earlier this fall, serving casual Southeast Asian cuisine like Vietnamense-style yellow curry with squash and whole grilled squid with green nahm jim. The restaurant, which draws its name from a William Blake poem, is located downtown at the intersection of SoHo and Chinatown. The Tyger also offers cocktails for delivery which arrive in thoughtfully branded packaging.

Haizea
Spanish chef Mikel De Luis opened Haizea, his first solo restaurant, in May with a takeout menu before opening up the bar-only seating within the intimate 22-seat restaurant. The menu is Basque inspired and served tapas-style, a blend of his background working in Barcelona and growing up in the Basque region. The restaurant also features a small market, which sells De Luis’ aMona salsas and other imported goods from Spain.

King Wang’s
Chef Tom Wang, an alumni of DBGB and Danji, opened a gourmet sandwich shop in Brooklyn’s Bushwick neighborhood this fall. Classic American sandwiches are reinvented through the addition of Korean, Japanese and Chinese flavors and ingredients like Szechuan slaw and Korean pepper aioli.

Temakase
The East Village restaurant combines Temaki and Omakase (Temakase — get it?) with a focus on serving handrolls in an intimate, 10-seat setting. The concept is led by chef Joemar Castro, who worked at Nobu Miami for the past eight years. In addition to handrolls — which are best served and eaten right away — the restaurant is offering box sets of traditional sushi rolls available for takeout and delivery.

Sami & Susu
Owners Amir Nathan and Jordan Anderson, who met while working at Maison Premiere, launched their Mediterranean restaurant Sami & Susu this summer. The concept, available for pickup and delivery, is primed to travel — after spending the summer operating out of the bar Maracuja in Williamsburg, they relocated to Lower East Side wine bar Ten Bells. The restaurant taps into regional Mediterranean cuisine as well as the owner’s family recipes, including Turkish Rolled Bureka from Nathan’s grandmother and chicken soup from Anderson’s mother. The menu also includes a selection of spreads like baba ghanoush and muhammara and small plates.

Leland Eating and Drinking House
Randi Lee launched a GoFundMe campaign earlier this year to help raise funds to renovate the corner space that would become Leland Eating and Drinking House. Recently opened, the Prospect Heights restaurant is catering to the neighborhood. A “vinyl hour” kicks off the afternoon with tunes, snacks, and drinks, before the restaurant transitions to its dinner menu of contemporary American plates, most of which are available for takeout.

Tiger Lily Kitchen
All of the items on the menu at this new fast-casual restaurant — located a few blocks east of Madison Square Park — are gluten-free, and vegetarians will be happy to discover that most of the selections are also plant based. The cuisine is Asian-influenced, with dishes like tofu with quinoa, mushroom pho, and Japanese squash soup on offer.

J-Spec
J-Spec opened this fall in the former Jewel Bako space in the East Village. The wagyu-centric menu offers A5 rank wagyu at a more accessible price point, and take-out options include a Wagyu-BBQ Kit to cook at home.

Sutra
A restaurant for post-shavasana. This plant-based restaurant, led by Matthew Kenney, is located on the roof of Alo Yoga’s Flatiron flagship. Although not currently offering takeout or delivery — and therefore, closed for the moment — when indoor dining returns, Sutra will launch dinner and its beverage program.

More From the Eye: Momofuku Eyes the Grocery Aisle