British director Ken Loach, who won the second Palme d’Or of his career, used his speech to plead against income inequality. 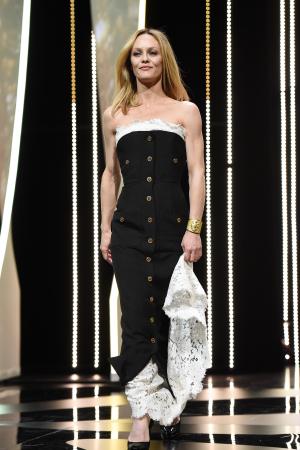 NITTY GRITTY: Despite the presence of glamorous jury members Kirsten Dunst and Vanessa Paradis, the closing ceremony of the 2016 Cannes Film Festival was a night not for red-carpet beauty but for honoring art house cinema in all its diversity.

British director Ken Loach was the evening’s big winner, taking home the second Palme d’Or of his career for social drama “I, Daniel Blake.” The 79-year-old, who received a standing ovation, used the stage to make a passionate plea against austerity policies that he blamed for rising income inequality in Europe.

“Cinema has many traditions. One tradition it has is to be a cinema of dissent and a cinema to represent the interests of the people against those who are powerful and noisy,” Loach said. “We must give a message of hope, we must say another world is possible and necessary.”

Dolan broke down sobbing as he accepted the prize for the film, which tells the story of a man with AIDS who returns home to tell his family he is dying. “My whole life, I will make movies that will either be loved, or not, but as Anatole France said, I have always preferred the folly of passions to the wisdom of indifference,” Dolan said.

The Best Director prize was a surprise tie between Romania’s Cristian Mungiu, for “Graduation,” and French director Olivier Assayas, for “Personal Shopper,” starring Kristen Stewart. The latter film was financially supported by Chanel.

The brand was also represented on stage, as Paradis wore a vintage Chanel haute couture gown from 1986 along with a Solaire cuff in 18-carat yellow gold and diamonds. Dunst, meanwhile, wore an intricate nude Valentino haute couture bustier dress.

“This constellation of decisions we’ve made have been made passionately, fiercely and beautifully. Nothing was left unsaid. It was exhausting but one of the greatest experiences you could have,” said Australian director George Miller, president of this year’s jury.

The top-acting honors went to two outsiders. Shahab Hosseini, a popular Iranian actor, won for his part in Asghar Farhadi’s “The Salesman.” Filipino actress Jaclyn Jose took her prize for “Ma’ Rosa,” a gritty drama about an impoverished mother who makes ends meet by selling drugs.

The festival also handed out two awards to female directors. The Jury Prize went to “American Honey” by British director Andrea Arnold, who performed a dance on stage to celebrate. “About five hours ago, I was sitting in my neighbor’s garden drinking tea, so this is very surreal,” she remarked.

The Caméra d’Or award for first-time directors went to Houda Benyamina for “Divines,” presented in the Directors’ Fortnight section, which focuses on underprivileged kids in French suburbs. In an impassioned speech, Benyamina called for more women to be involved in all levels of film-making.