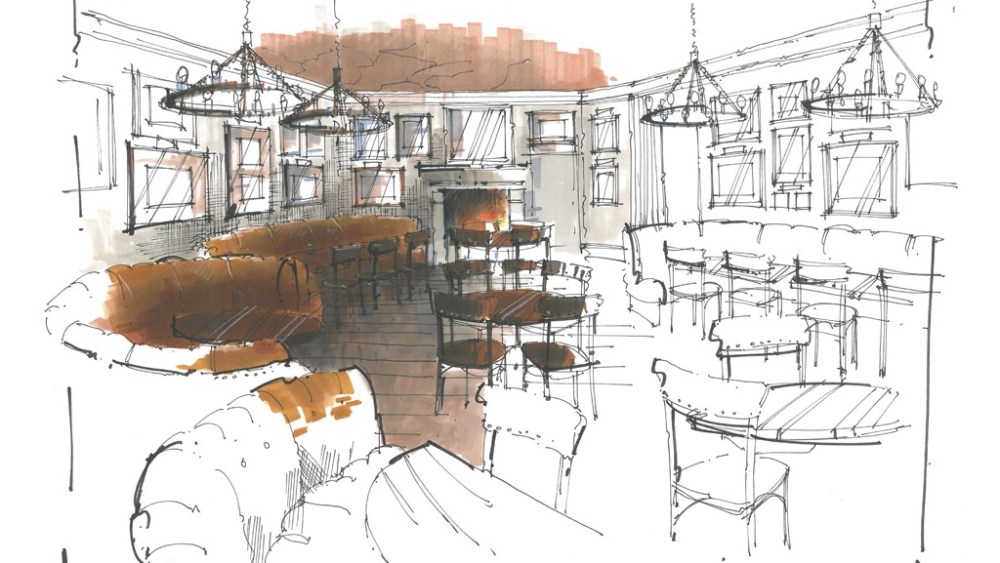 The floorboards creak in the shadowed, narrow staircase that leads up to the dining room at Bill’s Food & Drink, located in a 19th century town house in Midtown Manhattan.

“You always want a place to have a mom-and-pop feel when you first walk in,” says Sean Largotta, sitting in the private dining room of Bill’s, which is the newest addition to his Crown Group Hospitality concern. That cozy conceit has served profitably in establishing The Lion, Crown and now Bill’s as three of Manhattan’s most in-demand reservations, with a clientele in recent months that has included Leonardo DiCaprio, Robert DeNiro, Ralph Lauren, Tommy Hilfiger, Cameron Diaz, Jimmy Fallon, Katy Perry, Ryan Seacrest and Susan Sarandon peppered in amongst the well-heeled neighborhood regulars.

“Their restaurants attract a consistently gorgeous crowd. They have great style and delicious food,” says Calvin Klein designer Francisco Costa, who often patronizes The Lion and Bill’s with his partner John DeStefano. “The ambience is chic but with a feel of old New York.”

Next week, Crown Group is extending its buzzy brand of comfort food to London with the April 4 opening of Red House, an American-style bistro in Chelsea. Just like Bill’s, the restaurant occupies a historic building that dates back to the 19th century, situated at 2 Elystan Street. Chef John DeLucie, a partner in Crown Group, has devised a hearty, appetite-friendly menu for Red House, including fresh pasta made daily; spaghetti with Dorset lobster, cherry tomatoes and chili; Tuscan kale Caesar salad with anchovy dressing, and a roasted bacon chop with sauerkraut and violet mustard. An English-born partner in the business, Chris Jonns, who has stakes in several Crown Group properties, is charged with cultivating an appropriately stylish crowd for the joint.

The interior, as designed by Meg Sharpe — who has overseen the clubby look of all the Crown Group establishments — emphasizes original structural details, such as exposed brick walls, wood paneling and a fireplace. Like The Lion, a skylight serves as a focal point of the 3,500-square-foot space, which will also offer outdoor seating in warmer months.

“I couldn’t have asked for a better location. We didn’t want to be somewhere like Mayfair. We wanted a neighborhood feel,” says Largotta, who spent substantial time in London during his previous career as a bond trader at Lehman Brothers.

While DeLucie has garnered stockpots of press as the chef and public face of Crown Group — he’s written a memoir of his life in the kitchen — Largotta, who is chief executive officer of the company, has driven the growth of the business behind the scenes. His background in banking has come in handy in the notoriously challenging world of New York restaurant finances.

“John is the food type. I’m not a foodie at all. I’d rather go to Ballato’s [in NoLIta], which is like going home, than Le Bernardin or Daniel,” says Largotta, who was born in Brooklyn, raised on Long Island and graduated from Hofstra University. He worked at Lehman Brothers from 1998 to 2006, starting as an associate in structured finance and working his way up to a position as senior vice president in bond trading. While his professional background was on Wall Street, the food industry runs in Largotta’s blood. His father worked as a chef for an aviation food service company and his family owned a Brooklyn butcher shop and restaurant. From an early age, Largotta learned to make sausage, fresh pasta and home-cured olives under the watchful eyes of his father and grandfather.

In 2008, Largotta invested in The Charles restaurant, now defunct, which previously occupied the West Village locale of The Windsor. He founded Crown Group in 2009 with DeLucie and a third partner, Mark Amadei, who separately is an owner of the popular Delicatessen and Cafeteria restaurants in Manhattan. The trio opened The Lion in 2010, Crown in 2011 and Bill’s last November — bringing in various independent investors in each property. (Amadei is not involved in Red House in London.) From late 2010 to 2011, the company ran the food and beverage service at The Raleigh hotel in Miami, but exited that deal when the hotel was sold.

Back in New York, Crown Group will further expand this fall with a new cafe and nightlife concept in far West Chelsea called Cafe Centrolina. Located at 22nd Street and 11th Avenue — close to the neighborhood’s booming art scene as well as the popular Hudson River Park — the 4,000-square-foot venue on two levels is scheduled to open in September, right around Fashion Week.

“You’ll be able to get a brioche or croissant in the morning and quick sandwiches, panini and espresso during the day,” says Largotta. “It will be very chill and simple, with no reservations and a very neighborhood feel.”

A sexier, and less democratic, vibe is planned for after hours in the lower level lounge, where neon signs will illuminate the bar and decorative bookcases, and entry will be tighter. The nightlife operations are helmed by Ben Greiff and David Marino, who are partners in Crown Group’s two sports bars, both called The Windsor, located in the West Village and in the Gansevoort Park Avenue hotel.

Down the road, Largotta is working on a new vodka distilled in New York, his own red wine from a Tuscan vineyard and another potential hotel deal for Crown Group. “When I was younger, I wanted to get away from my parents’ world and that whole environment of butcher shops and delis,” Largotta says.

Today, he inevitably attributes some of that old-world know-how to Crown Group’s success.