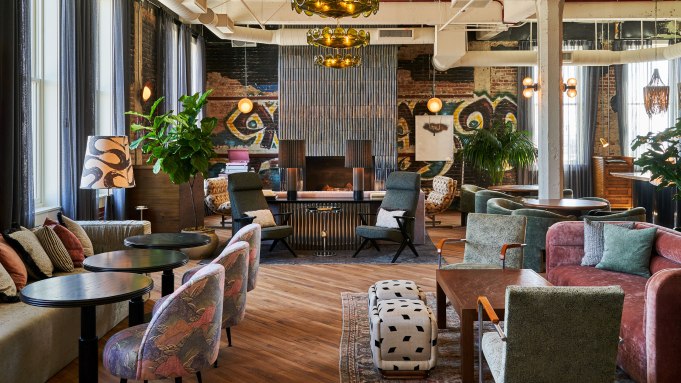 Los Angeles’ newest and much-awaited Soho House, located in the city’s booming Arts District at 1000 South Santa Fe Avenue, is the largest one in North America at 110,000 square feet.

“We’ve been wanting to open a [Soho] House in downtown L.A. for quite some time,” says founder Nick Jones. “There are so many creative people and businesses downtown, and that’s really the foundation for all of our houses, the local community.”

The members-only club will be available to its “founder members” — those preapproved to join Soho Warehouse — on Sept. 30 and to its “every house members,” those with access to the club globally, on Oct. 14.

Jones sees the location as a way to attract creatives living on the east side of L.A.: “Young people starting their careers in Silver Lake sitting alongside more established industry veterans from Pasadena.”

Founded in London in 1995, Soho House was created as an alternative to existing, more conservative clubs in England and caters to those in the arts and fashion industries. The company, operating as Soho House & Co., has locations in major cities around the world — Berlin, Istanbul, Barcelona, Amsterdam and Mumbai. In the U.S., outside of New York, there are outposts in Miami and Chicago. It wasn’t until 2010 that Soho House expanded to L.A., in West Hollywood on Sunset Boulevard, and six years later, the hospitality brand introduced Beach House Malibu, the picturesque beachfront property.

“L.A. is a big, sprawling city, so it’s exciting that we’re now able to appeal to creatives…who might have found West Hollywood inconvenient to incorporate into their daily lives,” Jones continues. “We want Soho Warehouse to be an extension of their own living space and part of the fabric of the neighborhood.”

This third location — a seven-story former warehouse and recording space built in 1916 — is the first on the West Coast to offer services already available at other locations. Unlike West Hollywood and Malibu, not only are there bedrooms, but there’s also a rooftop pool and two-story gym, a clear focus in the space. And at Soho House, it’s not simply referred to as a gym; it’s a “Soho Active gym.”

“We always knew we wanted a space with bedrooms and a ground floor where we could create a Soho Active gym and garden restaurant, also, a rooftop pool with a view,” says Jones, who sold a large share of the club to fellow British businessman Richard Caring in 2008, before billionaire Ronald Burkle took over, reportedly acquiring a 60 percent stake in 2012. “From the top floor, you can look out at the downtown L.A. skyline and east side neighborhoods of the city. It is a great view.”

“As a member, it’s also about joining a larger family,” says Jones. “For creatives in the downtown and east side neighborhoods, we’ve created the house to be an extension of their own living areas. Creating a way of life that’s morning, noon and night, a space where you can take a morning meeting, have lunch or meet friends for drinks.”

Along with an outdoor garden with olive trees and a Mediterranean-inspired restaurant on the ground level, the location offers 48 bedrooms across three floors, including the option of large bedrooms with a kitchenette, six-person dining table, guest powder room, walk-in closet and freestanding tub for those looking for a longer stay. (And for the first time in the U.S., Soho House is offering an in-room shopping option, featuring a capsule collection between Ssense, the Canadian luxury and streetwear retailer, and trendy L.A.-based designer Rhuigi Villaseñor of Rhude.) Anyone can book a room, which allows guests temporary membership to the house, including access to all the common areas (the sixth floor is particularly large with an open kitchen restaurant, 30-foot mosaic stone bar, fireplace and several work and sitting spaces), including the gym, changing rooms, sauna and steam room.

“The design of Soho Warehouse evokes Soho House’s signature ‘home away from home’ aesthetic, while also drawing inspiration from the local downtown L.A. area and the building’s historic roots,” says Candace Campos, Soho House & Co.’s U.S. design director. “Staying true to the original design, all exposed brick walls remain untouched. Much of the furniture also nods to two major design movements that coincide with the life of the building, fusing Art Deco elements from the original construction…with Seventies-style furnishings inspired by the property’s time as a recording space.”

Soho Warehouse is the company’s 25th “house,” as it turns 25 this year. It recently opened a space in Hong Kong and next plans to have locations in upstate New York; Austin, Tex.; as well as Rome; Tel Aviv, and Paris.