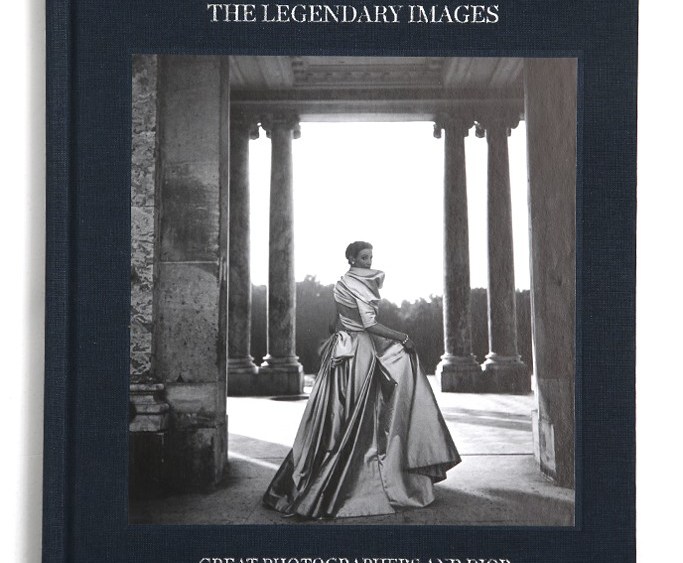 “Dior: The Legendary Images/Great Photographers and Dior” (Rizzoli). The book showcases the work of the legendary couturier and his successors at the fashion house in classic images by major photographers which capture the models and clothes of their time. There’s Henri Cartier-Bresson’s 1951 photo of Christian Dior and the model Lucy laughing in the models’ cabine; Richard Avedon’s 1955 “Dovima With Elephants,” and Loomis Dean’s 1957 shot of models in Dior couture clothes for spring 1956, which include a smart, sharply tailored suit and a voluptuous emerald green evening dress.

“100 Ideas That Changed Street Style” (Laurence King) by Josh Sims. Sims writes about everything from burlesque to acid jazz and how it influenced street style. There are also essays on Goth, biker culture, militant style, gang culture, Rasta, rave, graffiti, BCBG (the style of the Parisian bourgeoisie) and even the cell phone. He describes psychobilly as “Take rockabilly — an exaggerated style inspired by 1950s Americana — and cross it with 1960s garage, 1970s punk, extreme hairstyles, excess tattoos and a love of the lurid, and the likely result is psychobilly.”

“The Fashion Swatch Book” (Thames & Hudson) by Marnie Fogg. The book contains 1,155 images of fashion swatches, and lecturer and media consultant Fogg describes each fashion house and the way that they handle designing and producing fabrics. These include Liberty, Antik Batik, Paul Smith, Christopher Kane, Marimekko, Bruce Oldfield and Sonia Rykiel. The close-up photos of fabrics are marvelous; you feel as if you could touch them, although the cover of the book features the only real swatch in it — a variegated blue with the name of the book and its author printed on it.

“The Windows of Buck House: Fabulous Fictional Females” (Acanthus Press) by Deborah Buck. Buck had a store on Madison Avenue, and she used to do the windows with fanciful stories of women she created, like Lily La Roma, perfumier from Grasse. Berty Cardinal, an ornithologist from Brazil, for instance, had windows filled with birdcages and even birds. Rosa Valencia Fu Del Torres of Barcelona had windows with bullfighting pictures, swords, flowers and other paraphernalia associated with her trade. Dusty Bon Voyage, author and world traveler, had ones with a typewriter, a deck chair, stickered luggage and a life preserver. Waverly, a surfer from Hawaii, got exotic plants, coconuts, lava lamps and masks. Buck purposely didn’t show photos of the imaginary characters themselves, believing women are judged far too much on the way their faces and bodies look.

“This Is Warhol” (Laurence King) by Catherine Ingram, with illustrations by Andrew Rae. Part of a series on artists, the book tells the story of the ultimate Pop avatar, Andy Warhol, in graphic-novel fashion, taking him from obscurity in the smoky Pittsburgh where he grew up to art-world stardom in New York. There are cartoons of The Factory and its denizens and written sections on his most important series of paintings and prints.

“Uncle Sam Presents the Great American Documents, Volume I: 1620-1830” (Hill & Wang) by Ruth Ashby, illustrated by Ernie Colon. This imaginative book, which also takes the shape of a graphic novel, examines important documents all citizens should know. We go from the Mayflower Compact to the Declaration of Independence, the Constitution and its amendments and the Missouri Compromise. Catching up on forgotten American history was never so entertaining.

“French Riviera: Living Well Was the Best Revenge” (Assouline) by Xavier Gerard. No one can resist vintage photos of the Riviera, and here they are in all their flash-bulb-ready efflorescence. From the photo of actress Annabella at Eden Roc in 1933 on the cover to the snapshots of F. Scott, Zelda and Scottie Fitzgerald in their stylish exile in the Twenties, along with drawings and paintings, all of the visuals have a winning glamour with a dose of decadence. There are photos of Coco Chanel at her Villa de la Pausa in Roquebrune; of Marlene Dietrich in a deck chair, and a portrait of the young Peggy Guggenheim. There are also great crowd shots of the beaches and of the gamblers in the casino at Monte Carlo.

“Brazilian Style” (Assouline) by Armand Limnander. The book takes an “informal encyclopedia” approach to the elements of Brazilian style, with listings ranging from acai to Pele to the cartoon parrot Ze Carioca. Gisele Bündchen is the first entry. Other notable ones include incense; the punky pop group Yes Brazil; indigenous medicine; the massive Iguacu Falls on the border of Brazil and Argentina, and Brasilia, the fabricated new capital designed by the country’s great architect Oscar Niemeyer who, of course, has his own entry in the book.

“Olympic Favela” (Damiani) by Marc Ohrem-Leclef; text by Itamar Silva and Luis Perez-Oramas. This volume looks at a very different side of Brazilian life — it explores the favelas, where the poorest of the poor live in informal settlements with few amenities, from which they are being driven by officialdom as their country prepares for the Olympic Games. Ohrem-Leclef posed many of them with Olympic-esque emergency torches in their neighborhoods. Many of them are being paid to leave their neighborhoods or being pushed out less ceremoniously. Meanwhile, their simple houses overlook some of the most beautiful views in Rio, one reason the powers-that-be want them to relocate.

“Halston & Warhol; Silver & Suede” (The Andy Warhol Museum, Pittsburgh; Abrams, New York), edited by Abigail Franzen-Sheehan, with essays by Leslie Frowick, Geralyn Huxley, Corrine LaBalme and Valerie Steele, and contributions by Pat Cleveland, Chris Royer, Diane von Furstenberg and others. Halston always said, “You’re only as good as the people you dress,” and Warhol knew that, too, except in a different context — what was important for him was the people who collected his work and/or would pose for his portraits. Both men moved in the same jet-set/Beautiful People circles, went to all the same parties and were very comfortable together.

“Henri Cartier-Bresson: Here and Now” (Thames & Hudson) by Clement Cheroux. This is a monograph published to coincide with the first major show for the photographer after his death in 2004. And it’s all here, in black-and-white and color — the photos of poverty, of scenes in various countries, the news photos of breaking incidents and so on. He was regarded as the founder of photojournalism and coined the phrase “the decisive moment,” which refers to the precisely correct time to take a shot. In 1947, with Robert Capa and David Seymour (always known as Chim), Cartier-Bresson founded the Magnum Photo Agency. He also did portraits of Jean-Paul Sartre, Henri Matisse, the Joliet-Curies, Alberto Giacometti and Truman Capote.

“Erwin Blumenfeld: Photographs, Drawings and Photomontages” (Hazan/Jeu de Paume/Yale University Press). There are drawings, nudes, fashion photos and portraits. Blumenfeld was interested in the Neues Sehen movement, and often took photos from unusual high angles or experimented with techniques such as solarization. He sometimes wrapped his subjects’ heads in scarves to distort their features. He later was interned in camps in France during World War II and finally got a visa to the U.S., where he became the highest-paid photographer in the world and photographed more covers for Vogue than any other photographer before or since. This book argues that his artistic and visual experiments informed his fashion work.

“Living: Mexico City” (teNeues) by Marcela Aguilar y Maya; photography by Allan Fis. Stylish denizens of the Mexican metropolis show their personal spaces here. Gorgeous Lina Botero, one of artist Fernando Botero’s children, is on the cover as well as inside. Leading lights of the city’s design and art communities abound. Rafael Rivera and Javier Claverie, who own Habitacion 116, an architectural and interior firm, for instance, share a handsome dwelling replete with such photogenic collections and pieces as groups of vintage globes, a bird’s skeleton or a vintage Chinese chest. Photographer Alejandro Gomez de Tuddo travels all over the world, but he returns to his light- and plant-filled quarters, with its wild garden, in between.

“George Stacey and the Creation of American Chic” (Rizzoli) by Maureen Footer. In his time, society decorator Stacey was as well known as Sister Parrish, Rose Cumming, Syrie Maugham and Billy Baldwin. Why is he now almost completely forgotten? This sumptuous book, with its scarlet endpapers, sets out to redress the balance. There are beautiful pictures of rooms he did for the likes of Babe Paley at Kiluna Farms, Diana Vreeland in the city and country at Brewster, Lil Isles, Frances Cheney, Brenda Frazier, Marie Harriman and Minnie Astor. A renowned colorist, he juxtaposed such shades as lipstick red, daffodil yellow and pool table felt green or grass green, forest green and red in a single interior. The forbidden combination of red and green (usually Christmas only!) is particularly evocative.

“Living in Style: New York’’ (teNeues) edited by Vanessa Weiner von Bismarck with text by Jean Nayar. A condo on the High Line. A penthouse at The Plaza. An apartment with a perfectly framed view of the Chrysler Building. New York City is ideal for luxury living, and many elegant versions of it have made their way into this book. The breakfast room at the Plaza penthouse has dramatic, cutaway red curtains and murals by Hilary Knight, who illustrated “Eloise at the Plaza.” At a penthouse created from two apartments, a custom mahogany-and-bronze spiral staircase is in front of a two-story, 20-foot-high window. A spacious Brooklyn town house is intended to remind its owners of their time in Paris, and is decorated in a French manner.

“Unfamiliar Streets: The Photographs of Richard Avedon, Charles Moore, Martha Rosler and Philip-Lorca diCorcia” (Yale University Press) by Katherine A. Bussard. The fresh urban elements in Avedon’s work were his penchant for photographing fashion models in seemingly spontaneous — but still graceful and stylish — situations on the street. Meanwhile, Rosler’s views of a pre-gentrification Bowery, with its lost-in-time stores and its detritus of empty bottles of liquor, were especially sharply observed. And diCorcia captured a kind of urban anomie in his photos of anonymous urban crowds or faces on the street.