Another day, another Taylor Swift love saga to dive into. But as rumors swirl of her latest romance — with emerging British actor Joe Alwyn — just how aligned are they stylistically? WWD digs deep.

By Leigh Nordstrom and Kristen Tauer and Alex Badia on May 19, 2017
View Slideshow 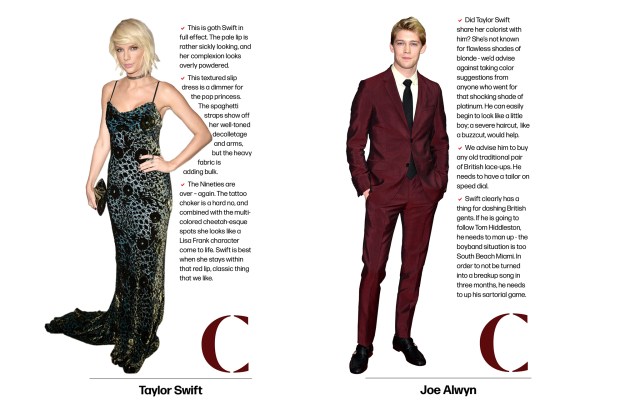 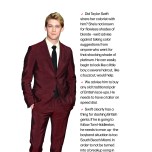 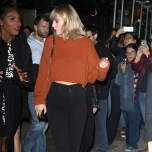 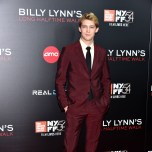 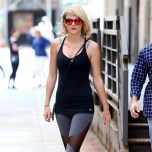 It’s been a quiet few months on the Taylor Swift dating front, but folks, we are back in action. After six months in paparazzi hiding, rumors have surfaced that the pop princess has taken up with budding British actor Joe Alwyn. Given the influx of paparazzi photos we are surely going to be seeing once they make their public debut, it’s our civic duty to delve into the real heart of the matter here: will their style game match up?

Alwyn’s career is certainly on the up-and-up. The 26-year-old London native broke out in last year’s Ang Lee film “Billy Lynn’s Long Halftime Walk,” alongside Kristen Stewart, Steve Martin, Vin Diesel and Chris Tucker. His second acting credit was “The Sense of an Ending,” based on the novel by Julian Barnes, with Charlotte Rampling, Michelle Dockery and Matthew Goode; he’ll next be seen in “The Favourite” with Emma Stone, who is believed to have played matchmaker between Alwyn and Swift.

So yes, he’s early in his career. And stylistically, it shows. He’s got the good looks and boyish charm to become a major movie star — and best-dressed list topper — but he’s just not there yet. Learning to belt his suit pants and opt for more traditionally British cuts will go a long way.

Swift, meanwhile, has never been a fashion girl. Recent months have seen her rebelling against her sugary-sweet cat lady look for dark lipstick, vampy dresses and Nineties chokers. Given her penchant for test-running a new look depending on her love life, we’re expecting a hairstyle update at the very least this summer.

One plus for the young couple is that Alwyn might already have the BFF — and fashion friend — stamp of approval. He appeared in a Vogue campaign for the September 2016 issue alongside Swift pal Gigi Hadid.

So is it going to be forever? Or will it go down in flames? Time — and song lyrics — will tell.