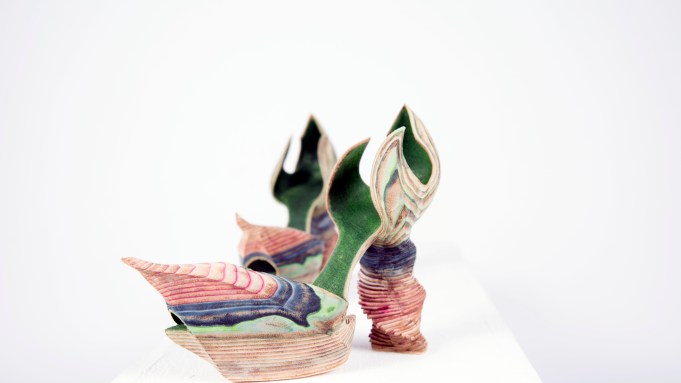 Can a shoe be a work of art? It can at least be a walk of art, as the title of a new exhibition landing at Parasol Projects Gallery later this month suggests.

“A Walk of Art: Visionary Shoes” explores the notion of whether a shoe that can’t necessarily be walked on can still be called a shoe — if it can’t, is it art? The display showcases roughly 60 designs by 39 students and alumni of Israel’s premiere Bezalel Academy of Arts and Design. It also marks Bezalel’s first fashion exhibition. Those featured include Kobi Levi, whose shoes have been worn by Lady Gaga and Whoopi Goldberg, Sigalit Landau, who’s best known for suspending objects in the Dead Sea until they crystallize, Tal Arbel of Norman & Bella and Alessandro Briganti, who previously worked with Alexander McQueen on designing the brand’s now-famous armadillo shoe.

“Something about shoes as this mystical object really allows designers and artists to use this as a canvas to express social, artistic and design ideas,” said Ya’ara Keydar, fashion scholar and “A Walk of Art” curator. Originally from Israel, Keydar has been working with Bezalel for the past year to put together the exhibit. She’s a graduate of the costume studies program at New York University, where she teaches a course on fashion in museums.

Founded in 1906, the Bezalel Academy specializes in the making of both traditional and high-tech shoes. “A Walk of Art” juxtaposes handmade designs with technologically advanced ones, and many of the shoes featured can’t actually be worn. Some don’t even come in pairs.

The artists turned to a variety of mediums — wood, metal and glass, for example — in creating the shoes, which come in a variety of styles — stilettos, platforms, wedges, sandals, etc. Highlights include a 3-D-printed shoe by Arbel and Briganti, a design by Or Kolker carved out of glued together chunks of leather and a porcelain shoe by Nimrod Gilo that’s reminiscent of a certain Disney princess.

“If you were to wear those shoes, you’d have to be very careful,” Keydar said of Gilo’s design. “These concepts of fragility and non-commercial materials bring to mind the fragility of the shoes of Cinderella. They bring the primary or mythical ideas that we have [had] about shoes for centuries now. These are really interesting combinations in design and fashion and art.” Even though the majority of pieces in “A Walk of Art” aren’t wearable, Keydar made it a point to note that the artists do know how to make comfortable shoes.

“The shoe industry in Israel is really vibrant,” she said. “Some of these designers also sell their shoes all over the world. So when they encounter the real world, they know how to create wearable, comfortable, commercial shoes. But what is interesting about the way they learn how to do that is that they release all those boundaries while they work on creating new shoes.”

Will the works be sold after the exhibition ends? Not necessarily. Keydar said she had already been approached by a collector interested in purchasing some of the designs, but all of the artists declined to sell. She hopes that the shoes will continue to go on display elsewhere, and would love to see them go international.

“The exhibition is built to travel easily, and we already have a couple of asks to host it once it concludes in New York, which is very exciting,” she said. These shoes weren’t meant for walking, but they were meant to travel the world.

“A Walk of Art: Visionary Shoes” opens at Parasol Projects Gallery from Jan. 23 to Feb. 13.